I know this is late and now "old news" but I never jump the gun especially on such a topic that hits us all deep in the heart. I'm very saddened to read this tragic story and this close to our most humbling Holiday emotions fly.

I pray that Sarah is found safe and untouched, an unlikely thing at this point. 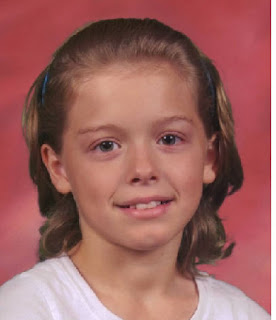 The other troubling part of this story is that I know T. J. Leggs, I worked with him, I knew his past and the allegations about him being slung around on other blogs are just not true. Yes he was a registered sex offender, He did a stupid thing as a young man, we never know what another human will do or what they are capable of. I hope T. J. didn't do this, if he did I hope he gets repay of 10 fold. But mostly I hope that little Sarah is found unharmed.

Authorities and volunteers prepared to search through the night with hopes of finding 11-year-old Sarah Haley Foxwell -- safe.

The case of brown-haired Sarah, last seen in Christmas-themed pajamas inside her Old Ocean City Road residence about 9:30 p.m. the day before, by Wednesday evening had been re-classified from a "missing person" investigation to a "non-family abduction," said Lt. Babe Wilson of the Wicomico County Sheriff's Office.

Several dozen police officers were joined by volunteers from as far as the western shore and northern Delaware who searched in freezing nighttime temperatures Wednesday as authorities questioned Leggs at the Sheriff's Office.

The suspect is known to the girl's family, according to a police official.

Earlier Wednesday, the search focused on a radius about three miles in either direction of Sarah's residence, Wilson said.

A police command center was established about noon Wednesday at a church on Zion Road at Zion Church Road, a location that is central to the residences of both the girl and the suspect, Lewis had said.

Details about the suspect's conviction for a sex crime were not immediately available, Lewis said.

A national Amber Alert about the 4-foot 8-inch tall Sarah also was issued.

By early evening, scores of both law enforcement personnel, local Samaritans and professional volunteers from outside the area had either joined the search or were on standby to help. Police helicopters from both Maryland and Delaware state police agencies joined, as did the Maryland Natural Resources Police Search and Rescue, Salisbury Police Department, Worcester Sheriff's Office and Delmarva and East Coast k-9 search and rescue units.

"Everybody is offering," Wilson said outside the command center. "(Police) officers from Fruitland, Delmar, Ocean City have contacted us."

If necessary, searchers would continue the search through the night, Wilson also said.

"The search has been going on since around 10 a.m.; there's a number of people searching, about 30 or 40," Wilson said. "We will continue; we're staying. This is a search and rescue -- we're optimistic."

Police ask anyone with information about Sarah's disappearance to contact the Sheriff's Office at 410-548-4891.

Keep updated on the story @ Delmarvanow.com
Posted by The Public Eye at 9:35 AM