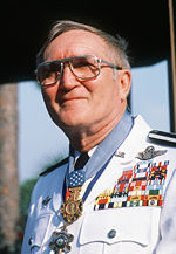 I got shot down over N Vietnam in 1967, a Sqdn. Commander.
After I returned in 1973...I published 2 books that dealt a lot
with "real torture" in Hanoi . Our make believe president is
branding our country as a bunch of torturers when he has
no idea what torture is.

As for me, put thru a mock execution because I would not respond...
pistol whipped on the head...same event.. Couple of days later...
hung by my feet all day. I escaped and a couple of weeks later, I got
shot and recaptured. Shot was OK...what happened afterwards was not.

They marched me to Vinh...put me in the rope trick, trick...almost
pulled my arms out of the sockets. Beat me on the head with a
little wooden rod until my eyes were swelled shut, and my unshot,
unbroken hand a pulp.

Next day hung me by the arms...rebroke my right wrist...wiped
out the nerves in my arms that control the hands...rolled my fingers
up into a ball. Only left the slightest movement of my L forefinger.
So I started answering with some incredible lies.

Sent me to Hanoi strapped to a barrel of gas in the back of a truck.

Hanoi..on my knees....rope trick again.. Beaten by a big fool.

Into leg irons on a bed in Heartbreak Hotel.

Much kneeling--hands up at Zoo.

Several more kneeling events. I could see my knee bone thru
kneeling holes.

There was an escape from the annex to the Zoo. I was the Senior
Officer of a large building because of escape...they started a mass
torture of all commanders.

I think it was July 7, 1969...they started beating me with a car fan
belt. In first 2 days I took over 300 strokes...then stopped counting
because I never thought I would live thru it.

They continued day-night torture to get me to confess to a non-existent
part in the escape. This went on for at least 3 days. On my knees....
fan belting...cut open my scrotum with fan belt stroke. opened up
both knee holes again. My fanny looked like hamburger...I could not
lie on my back.

They tortured me into admitting that I was in on the escape...and
that my 2 room-mates knew about it.

The next day I denied the lie.

They commenced torturing me again with 3- 6- or 9 strokes of
the fan belt every day from about July 11 or 12rh..to 14 October
1969. I continued to refuse to lie about my roommates again.

Now, the point of this is that our make-believe
president has declared to the world that we (U.S..) are a bunch of
torturers...Thus it will be OK to torture us next time when they
catch us....because that is what the U.S. does.

Our make-believe president is a know nothing fool who thinks
that pouring a little water on some one's face, or hanging a pair of
women's pants over an Arabs head is TORTURE. He is a meathead.

I just talked to MOH holder Leo Thorsness, who was also in my squadron,
in jail...as was John McCain...and we agree that McCain does
not speak for the POW group when he claims that Al Gharib was
torture...or that "water boarding" is torture.

George Everett "Bud" Day(born February 24, 1925) is a retired
U.S. Air Force Colonel and Command Pilot who served during the
Vietnam War. He is often cited as being the most decorated U.S.
service member since General Douglas MacArthur, having
received some seventy decorations, a majority for actions
in combat. Day is a recipient of the Medal of Honor.
"We the people are the rightful masters of both Congress & the courts, not to overthrow the Constitution, but overthrow the men who pervert the Constitution." - Abraham Lincoln