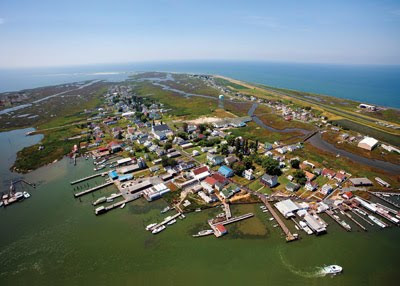 According to Sheriff Larry Giddens, the remains have been confirmed to be that of a human body and have been declared by the medical examiners office to be prehistoric with a time of death estimated at 75 to 150 years ago.

According to Sheriff Larry Giddens, on Wednesday, January 27, the Accomack County Sheriffs Office received a report from the Virginia Marine Police regarding skeletal remains that were found in a box near a dumpster on Tangier Island. The aged skeletal remains were transported by the Investigations Division to the Medical Examiners Office in Norfolk, Virginia.

The remains are believed to be of a historic gravesite on the island of Port Isobel by Tangier residents. The findings of the medical examiner reinforce this belief.

Now honestly, they know they've been having trouble with these graves washing away, so when are they going to do something about it?

Mystery Solved? So, I guess they found out how they got in a cardboard box,who put them there, and where that person/persons found them to begin with? Sure they found the age but that's it. There have been headstones that have been "missing" out of peoples yards too! Humm..