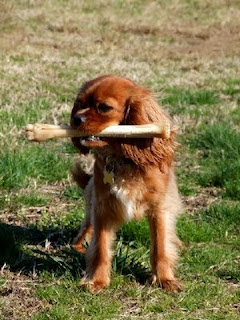 Human remains and burial artifacts were discovered yesterday in the middle of the airport runway. A Notice to Airmen has been issued closing the field through April 8th to facilitate the exhumation.

The remains were discovered by the current airport owner who attributes the find to the record rainfall and widespread flooding at the airport.

"We had another downpour a couple of days ago and yesterday my dog was doing her daily rounds of the airport and she came back to the office with this enormous bone," said owner Gordon Campbell. "I thought the dog looked cute with this big bone in her mouth so I took a picture and emailed it to some friends. One of the recipients was a doctor who immediately replied that it looks like a human bone my dog was chewing on. Now my dog has not been known to kill anyone so I thought there must be some human remains nearby."

A walk down the runway led to the area where the dog had found the bone. "The grave site is about 1000 feet from the southern end of the runway and exactly where the threshold for the runway used to be," said Campbell.

While no analysis of the remains has yet been undertaken they are thought to be those of Darrell Kellam, the the founder of the Airport in 1933, who died in 1976. An old timer at the field remembers hearing that Mr. Kellam had been buried here.

"Years ago someone passed through and recounted that Darrell Kellam had requested that he be buried at the end of the runway. I never really thought much about it but I know this airport was Mr. Kellams pride, joy and lifelong endevour. Darrells blood ran through this place and I guess that's no longer a metaphor," commented Ray Gefken. There has been no further exhumation of the remains out of respect for the deceased but some careful probing of the site yielded a box containing burial artifacts.

"There was a box of artifacts that was buried alongside the body. A Piper Cub Owner's Manual, a couple aviation books and a log book with Mr. Kellam's name in it," said Gordon Campbell.

Speculation is that flooding over the years helped float the remains to the surface.

"This airport has quite a history and this discovery is just one more footnote", said Mr. Campbell, adding, "I always thought that when I go it would be nice to be buried here. Since the south end is already spoken for I'm happy taking the north end. At least I will be in good company."

A NOTAM has been issued closing the field to enable a crew to carefully exhume the body. I am going to do some research and if Mr. Kellam wanted to be buried at the end of the runway we will comply with his wishes but move the burial site to the present runway end that is thankfully on higher ground said Campbell.

Weirwood Airport is in Northampton County.
Posted by jmmb at 4:25 PM