Family Billed For Damages After Pet Was Killed By A Car 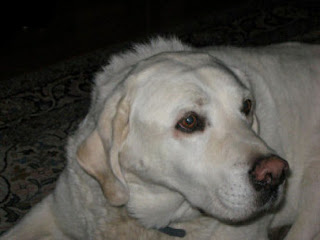 When Kim Flemming arrived home from work on March 23 and let the dog out, she didn’t know these were the last few moments she would see the family’s beloved yellow Lab alive.

Twelve-year-old Jake loved to roam the area around the Flemmings’ Leslie St. home in Aurora.

“Next thing I knew there was a knock on the door and a gentleman said, ‘Do you have a dog? He’s on the road,’ ” Flemming recalled. “This lady had hit him. I got to the road and he was dying. He died in my arms.”

About two months later, on May 17, Flemming received a bill for $1,732.80 from State Farm Insurance.

The letter, which included five pages of documentation and three pages of photographs, explained that State Farm had received a claim for damages from the driver.

“Our investigation into this matter has found you to be 100-per-cent responsible. As such, we are looking to you for reimbursement,” the letter stated.

The bill included the cost of parts and labour for fixing the bumper, as well as the cost of a rental car.

“We’ve lost part of our family and now we have to reimburse this insurance company? It brought back the grief for us all,” Flemming said.

State Farm interviewed the driver, police and other witnesses, said spokesman John Bordignon, adding that Canadian courts have found that the rules of negligence apply in such cases.

“This is an incredibly unfortunate circumstance, but we’re going by the precedent that we have. We see no negligence on the part of the driver and according to law, we believe the owners were negligent in the sense that they could have made sure their dog wasn’t free on the roadway,” Bordignon said.

“By law, we have a right to pursue our customer’s interest in this matter in terms of the damage to the vehicle.”

State Farm has told the Flemmings it can pursue costs through their homeowner liability insurance, rather than through them personally, Bordignon added.

Asked how a case involving a pet would differ from one involving a pedestrian or cyclist, Bordignon responded: “We look at each case on its individual merits. We have to consider the rights of our customers who incurred damage or injury, but depending on the situation all circumstances are looked at before any decision to subrogate is made.

“There are many instances where we haven’t pursued subrogation when a pedestrian or cyclist is killed in a motor vehicle accident.”

The Flemmings said Jake, who weighed about 70 pounds, was accustomed to roaming the area around the family’s home.

Aurora bylaws require a pet to be on a leash when off the owner’s property.

The family has informed State Farm they do not plan to pay the bill, and are considering their options.

“The whole thing is just macabre. We were deemed 100-per-cent responsible. Isn’t the driver responsible for how they operate their vehicle?” Flemming said.

“I think going to this level is insulting,” Flemming’s daughter, Katherine, said, her voice breaking. “We’ve lost a member of our family but we’re supposed to pay for the damage to her bumper? That’s just wrong.”