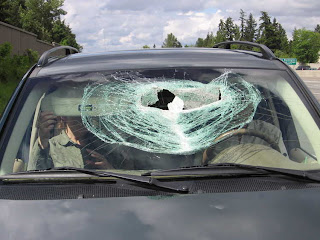 KIRKLAND -(Washington State) It came out of nowhere for a couple driving along Interstate 405 near Kirkland Sunday. A 4-foot pickaxe went flying right through their windshield as they were driving.

Pete Henning was with his wife, Maxine, when it happened. "All of a sudden I saw something fly up in the air, looked like an ice climbing axe," said Henning, "next thing there was a loud pop and it came through the windshield and got wedged in the seat between the two of us."

The Bellevue couple were driving their Mercedes SUV. They headed southbound on I-405 near Kirkland at 3:45 p.m. on Sunday. They say the pickaxe soared off the back of a truck just ahead of them. 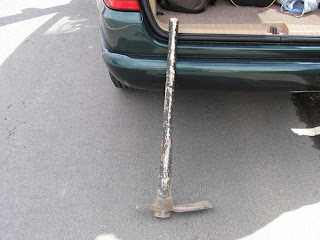 "Thankfully both Maxine and I wear glasses so we didn't have any glass in our eyes," says Henning, "but I'm afraid that we might have, had we not had glasses."

"It could have easily taken off either of their heads," says Washington State Patrol Trooper T.M. John, "or caused major damage to them, it was a very scary situation."

Trooper John says a 911 caller saw it happen and was able to describe the truck where the pickaxe came from. It still has not been found.

Troopers says the truck is a late 1980's or early 1990's green or teal pickup truck with wood panels on each side of the bed. 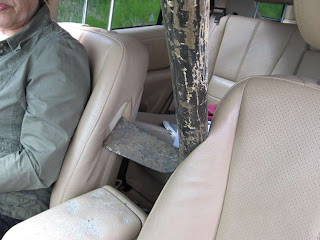 "It wasn't one of those that just had some equipment here and there," says Trooper John, "it was described as jam packed full of debris that was clearly unsecured."

In Washington state, it's a serious crime for a load to come unsecured and hurt someone. Convictions usually result in a year in jail, and $5,000 in fines.

Henning says the lesson is, it can happen anytime, anywhere, and if he and his wife hadn't been so lucky, who knows what would have happened. 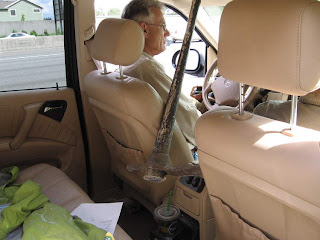 "It doesn't matter what sort of a road your on, whether it's a rough road or a smooth road, things can come off," says Henning, "and if you have a truck with anything that's loose that can come out, make sure it's tied down."

If you think you've seen the truck described above, give the Washington State Patrol a call at 425-401-7788.