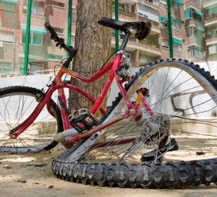 A 9 year old child was struck by an Accomack County Sheriff's Deputy on Monday August 30, 2010 according to Virginia State Police.

Virginia State Police Sergeant Michelle Anaya says Deputy Earl Drummond was driving his 2008 Ford Police Interceptor on Shields Bridge Road in Belle Haven at 6:00 PM when he struck Quaizal Kellam, 9, while he was riding his bicycle.

Sergeant Anaya said no charges were filed against Deputy Drummond because Kellam was riding his bicycle on the wrong side of the road. Kellam was transported to the hospital after the accident; Anaya said she was not aware of the victims condition.
www.shoredailynews.com
Posted by jmmb at 7:15 AM