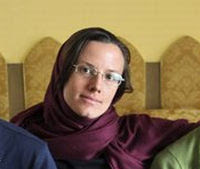 TEHRAN, Iran – In just a few dizzying hours, American Sarah Shourd exchanged a cell in Tehran's Evin Prison for a private jet crossing the Persian Gulf on Tuesday, after an apparent diplomatic deal to cover a $500,000 bail and secure a release that seemed in jeopardy from the start.

Shourd was met by her mother and U.S. diplomats at a royal airfield in the capital of Oman, which U.S. officials say played a critical role in organizing the bail payment and assuring it did not violate American economic sanctions on Iran.

Shourd stepped off the private Omani jet and into the arms of her mother in their first embrace since a brief visit in May overseen by Iranian authorities — and her first day of freedom in more than 13 months. Shourd smiled broadly as they strolled arm-in-arm through the heat of the late summer night along the Gulf of Oman.

"I'm grateful and I'm very humbled by this moment," she said before boarding the plane in Tehran for the two-hour flight to Oman.

The whirlwind departure of the 32-year-old Shourd brought little change for two other Americans — her fiance Shane Bauer and Josh Fattal — who remained behind bars while authorities moved toward possible trials on spy charges that could bring up to 10 years in prison if they are convicted.

The three were detained along the Iraq border in July 2009. Their families say they were innocent hikers in the scenic mountains of Iraq's Kurdish region and if they did stray across the border into Iran, they did so unwittingly.

"All of our families are relieved and overjoyed that Sarah has at last been released, but we're also heartbroken that Shane and Josh are still being denied their freedom for no just cause ... They deserve to come home, too," said a statement by the three families.

Iran, however, has shown no hints of clemency for the two 28-year-old men. Indictments on espionage-related charges have been filed and Tehran's chief prosecutor has suggested the cases could soon move into the courts, with Shourd tried in absentia.

"At the same time, as secretary-general of the United Nations, I would sincerely hope that Iranian government will again very favorably consider releasing the remaining two American hikers so that they could join their families as soon as possible," he said in an interview in New York with AP and AP Television News.

Any other scenario could bring more unwanted attention to the growing rivalries inside Iran's Islamic leadership.

Even the gesture to release Shourd on health grounds — first raised as an act of Islamic benevolence last week by President Mahmoud Ahmadinejad — turned into a spectacle of high-level political bullying and sniping over who controlled her fate and the overall wisdom of letting her go.

The open bickering seemed to harden the divisions that have been developing since the brush with chaos after Ahmadinejad's disputed re-election last year.

On one side are Ahmadinejad and his allies, led by the vast military and economic network of the Revolutionary Guard — what some analysts have called the "militarization" of the Islamic state. The other pole reflects the old guard of Iran's once-unchallenged authority, Supreme Leader Ayatollah Ali Khamenei, and the traditional pillars of the theocracy such as the judiciary.

In Shourd's case, the judges came out on top. They humbled Ahmadinejad and set the ground rules for her release with a staggeringly high bail.

But in the wider sense, the feuds display the fraying consensus among Iran's conservative leadership — with Ahmadinejad's critics increasingly outspoken in their claims he is trying to expand his reach and redraw Iran's political map. 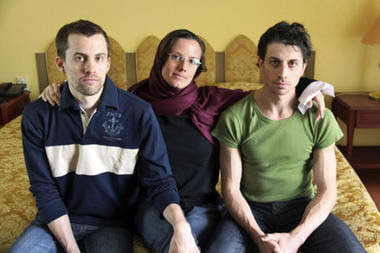 Such rifts could eventually make it harder for Iran to speak in one voice on key issues, such as its nuclear program and any future overtures to end 30 years of diplomatic estrangement with the United States.

"Iran's leadership managed to put down the opposition after Ahmadinejad's election, and now they are fighting among themselves," said Mehrzad Boroujerdi, a professor of Iranian affairs at Syracuse University.

Ahmadinejad may have felt the sting from the judiciary over the handling of Shourd's release. But he came away with the outcome he sought: a goodwill gesture less than a week before he is scheduled to arrive in New York ahead of the U.N. General Assembly.

Ahmadinejad has said Shourd was being released on compassionate grounds. Her mother says she has serious medical problems, including a breast lump and precancerous cervical cells.

Shourd's release, some analysts say, could be used by Iran as a way to deflect the international outcry over a stoning sentence for a woman convicted of adultery and the continued crackdown on opposition groups — which led two Iranian ambassadors in Europe to quit this week and seek asylum.

"Ahmadinejad is possibly trying to make the environment less hostile in New York," said Rasool Nafisi, a researcher on Iranian affairs at Strayer University in Virginia.

Even in the last minutes, Ahmadinejad tried to put his stamp on the release. His adviser on women's affairs, Maruyam Mojtahedzadeh, was on hand to greet Shourd at Tehran's Mehrabad Airport.

In a statement to Iran's state-run Press TV before boarding the flight to Oman, Shourd thanked Ahmadinejad and other Iranian leaders for "this humanitarian gesture."

"I want to really offer my thanks to everyone in the world, all of the governments, all of the people, that have been involved," added Shourd, wearing a maroon headscarf and a tan coat.

Upon arrival in Oman, Shourd also thanked the sultan for his help and said she would turn her efforts to trying to win the release of her companions. Her immediate travel plans were unclear. A U.S. official said she would be in Oman for at least a day.

Shourd, who grew up in Los Angeles, Bauer, who grew up in Onamia, Minn., and Fattal, who grew up in Elkins Park, Pa., were detained on July 31, 2009, and accused of illegally crossing into Iran and spying in a case that has deepened tensions with Washington.

Up until the moment Shourd was led outside the gray walls of Evin Prison, it was unclear whether the opening for her release could just as suddenly close.

A day earlier, a commentary by a news agency linked to the Revolutionary Guard called the bail an insult to Iran's security and intelligence forces. Shourd's family then said they couldn't afford the amount and the State Department noted it would not offer financial help.

Then came the unexpected news from Tehran's chief prosecutor, Abbas Jafari Dowlatabadi, that bail had been paid to Iran's Bank Melli in the Omani capital Muscat. Shourd's family has not disclosed the source of the funds — opening speculation that a diplomatic pact was cut with Oman.

A U.S. official said neither the U.S. government nor the families of the hikers put up the money, but could not say who else might have paid it.

All signs pointed to Oman, both a close Western and Iranian ally that wraps around the southeast corner of the Arabian peninsula.

Oman is seen as an important diplomatic bridge with Tehran because the two nations share close bonds as guardians of the Strait of Hormuz at the mouth of the Gulf, the seaway for an estimated 40 percent of the world's oil.

Another U.S. official said Omani negotiators had played a critical, behind-the-scenes role, working with Iran's judiciary and Swiss diplomats who handle U.S. affairs in Iran. Oman was key in coordinating the bail payment, the official said — suggesting some kind of channel to avoid violating American sanctions on Iran.

Both U.S. officials spoke on condition of anonymity because of the sensitivity of the issue.

U.S. sanctions put blanket restrictions on transactions with Iran's main state bank, Bank Melli, which has been the channel for past bail payments to Iranian courts by foreign detainees. Washington accuses the bank of helping fund Iran's ballistic missile development and its nuclear program, which the U.S. says could eventually lead to atomic weapons. Iran says it only seeks peaceful nuclear reactors for energy.

In a statement, Oman's government said it "welcomes" Shourd's release and hoped "other positive steps will follow in the course of the Iranian-American relations."

Oman "in recent days and weeks became a key interlocutor to help us work this case with the Iranian government," State Department spokesman P.J. Crowley said. "And we are very grateful to the role that Oman has played."

He could not say if any money had changed hands in winning Shourd's release, but noted that "arrangements were made that satisfied Iranian requirements under their judicial system."

At the same time, Crowley said the U.S. government had no information to suggest any U.S. or international sanctions on Iran had been violated.

"I am very pleased that Sarah Shourd has been released by the Iranian government, and will soon be united with her family," Obama said in a statement.

Shourd's mother, Nora, said she has hoped and prayed for this moment for 410 days.

"Sarah has had a long and difficult detainment and I am going to make sure that she now gets the care and attention she needs and the time and space to recover," she said. "I can only imagine how bittersweet her freedom must be for her, leaving Shane and Josh behind."