To The Community- From Police Chief Kelvin D. Sewell 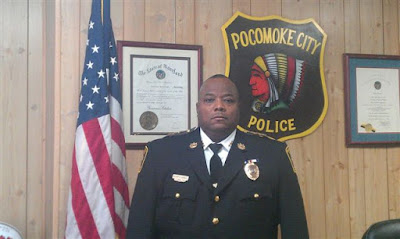 MISSION STATEMENT
The members of the Pocomoke City Police Department are dedicated to providing the highest quality police services in order to enhance community safety, protect life and property, and reduce crime and the fear of crime.

To do this, we pledge to develop a partnership with the Community, lead a community commitment to resolve problems, and improve the safety and quality of life in our city.

We will perform our duties with honesty, zeal, courage, discretion, fidelity, and sound judgment. It is essential that all members of the Pocomoke City Police Department remember that in the execution of their duties they act not for themselves but for good of the public.
Posted by jmmb at 9:38 AM

I have met and talked with the new chief and I strongly believe that he is going to make a difference here in Pocomoke City. He has a wealth of knowledge and experience when it comes to fighting crime.

I am a Pocomoke City Police Officer. Already Sewell is making changes within the Dept. Some Officers are happy and a couple are upset. But I can already see that the changes are positive and is working. People are now being put in place who are capable of leading and not there because of who you know.

I wish the officers wouldn't be upset this early in the process. They need to try and be open to any changes at the beginning. They may end up liking what the Chief has to offer.
I'm an old horse who doesn't like the apple cart upset too much, but I can honestly say usually I end up liking change.

I am a long time resident of Pocomoke City and from what I have seen so far from Chief Sewell tells me that he is doing an excellent job with the police department. Officers are walking foot daily and based on the articles from the Pocomoke Public eye, more arrest are being made, and Officers are more visible in the community. I grade Chief Sewell and his officers with an A+.

I'm sure Chief Sewell is excited to hear all the wonderful comments. Thanks for your comment and please keep reading the Pocomoke Public Eye.

It is deffiently a presense of leadership now in the Pocomoke Police Department. Since the arrival of Chief Sewell's to the Eastern Shore I see great things are happening inside the P.D.

Pocomoke City is back on Track. Thank You Chief Sewell.

Chief Sewell is a graduate of Coppin State University where he received his Bachelors of Science Degree in Criminal Justice. He is married with two Children. Chief Sewell spent 22 1/2 years as a Baltimore City Police Offier. He worked in several specialized sections before his retirement in November 2010. Chief Sewell is a highly decorated Officer who received two bronze stars, five commendations, The Governors award for Officer of the year in 1995, two House of Delegates award for Officer of the year etc. While at Baltimore City, Chief Sewell supervised the Integrity Unit of Internal Affairs. He was also Supervisor in charge of the Narcotics Unit along with five additional years with DEA as a task force/undercover officer. His last assignment was with The Baltimore City Homicide Section where he supervised detectives who investigated homicides, suicides, suspicious deaths, kidnappings, abductions and police involved shooting incidents.
Chief Sewell is also the author of a five star best seller book called WHY DO WE KILL. This book talks about some of his most high profile homicide cases he investigated including the famous John's Hopkins Hospital shooting of a doctor in 2010.
Knowing Chief Sewell for many many years as an intelligent, no nonsense type of guy. Pocomoke City is fortunate to have him as their next leader.

Anon 3:53 Thank you. What a great idea for a post and something I should have presented a few weeks ago but just didn't think about it. (Sorry, Chief)

I have met with Chief Sewell one time and he is a no nonsense kind of guy. He's a great man filled with personality, good sense of humor and the ability to laugh and smiling. Within just a short period of time he has turned the department around and I am so very glad that the people of Pocomoke now know about the crime that goes on in their town. They feel confident now that something is being done. They have been made part of the department that serves them. It didn't take Chief Sewell long to spring into action and include the citizens of Pocomoke. They deserve this kind of goodness.