Less than 24 hours after The Baltimore Sun published a story about the Babe Ruth Birthplace and Museum's year-long search for the owner of a rare and valuable baseball card, the owner has surfaced.

A man identifying himself as Glenn Davis of Bethany Beach, Del., contacted the museum -- and the newspaper -- Tuesday to say he was the owner of the 1914 Baltimore News Babe Ruth rookie card.
It's one of the most valuable cards on the market, with an estimated value of $500,000. No more than 11 of the cards are believed to exist.

Although the museum on Emory Street has displayed the card for 12 years, officials there learned only recently that the value of the card had skyrocketed.

That prompted plans for a prominent new display of the card and a renewed search for Davis, who called the museum and spoke to executive director Mike Gibbons.

"He told me if it were up to him, he'd leave the card with the museum," said Gibbons, who is certain the man he spoke to is the owner of the card. "But he was going to talk to his wife about it, and he said his wife might have other ideas.

"He promised he'd get back to us by the end of the week with his decision."

In an e-mail to The Baltimore Sun, Davis said: "Well, you found me. I didn't think it was possible in today's world to hide! I was not aware that moving to Bethany Beach, Del. would be better than the witness protecting plan!"

Davis thanked the newspaper for publishing the article, "which [led] to my getting the word regarding the museum's attempt to reach me." 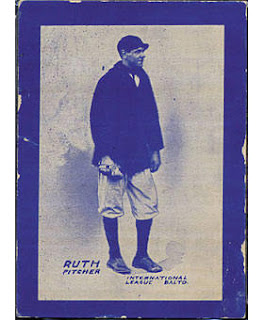 He did not return phone calls from the newspaper seeking further comment. According to Gibbons, Davis was on a business trip to Atlanta.

The rare 1914 Babe Ruth rookie card -- along with 14 others featuring Ruth's teammates on the Baltimore Orioles of the International League, was originally donated to the museum by Glenn Davis' father, Richard Davis, in 1998.

After Richard Davis died, Glenn Davis renewed an agreement in 2001 allowing the museum to display the cards on a long-term basis, with no time frame for their return.

But when the Ruth rookie card was appraised last year for $500,000 -- surpassing the Honus Wagner tobacco card as the priciest on the market -- museum officials decided to feature it in a new "blockbuster" display on baseball card collecting.

Before doing that, though, they wanted to contact Davis about their plans and make sure he approved.

"I look forward to getting up to Baltimore to visit and see the card in its new display," said Davis in his e-mail to The Baltimore Sun. "It has been a while."