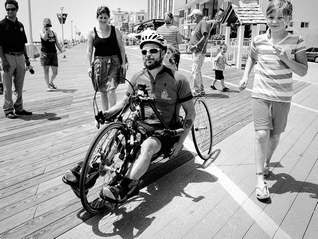 OCEAN CITY -- There are 1,480 miles between St. Louis, Mo., and Ocean City. Allen Baumgartner should know; the 33-year-old just traveled all of them on a handcycle.

Two months after setting out from his home in Arnold, Mo., Baumgartner came to the end of his journey on the Boardwalk at 14th Street, the final stop on his ride to raise awareness for spinocerebellar ataxia, a degenerative brain disease that affects movement.

"To see the U.S. from a foot off the ground is impressive," Baumgartner said, just before he climbed out of his three-wheeled cycle and walked, leaning on his two young daughters, down the beach to the Atlantic Ocean.

More than a year ago, Baumgartner, who has lost some of the use of his legs to spinocerebellar ataxia, decided he wanted to ride a wheelchair to Washington to raise awareness for the disease. According to the National Institutes of Health, spinocerebellar ataxia is a rare genetic neurological condition that affects the brain and spine, disrupting muscle control.

Baumgartner was diagnosed in 2008 after losing his ability to walk unassisted. Otherwise in good health, he soon got involved with the Disabled Athlete Sports Association, a St. Louis-based group that engages disabled children and adults with sports. The organization introduced Baumgartner to the handcycle -- an arm-powered, three-wheeled bike -- and provided support as he trained for his cross-country trip.

The $4,540 Baumgartner has raised during his journey will be donated to DASA.

Later, while at an area TV station for an interview, he met Ocean City Mayor Rick Meehan, who invited him to finish his journey in the resort.

Baumgartner met up with his wife and daughters near Rehoboth Beach before making the final ride down Route 1 -- what he called "a victory march" -- to Ocean City.