"Hands Across The Sand" 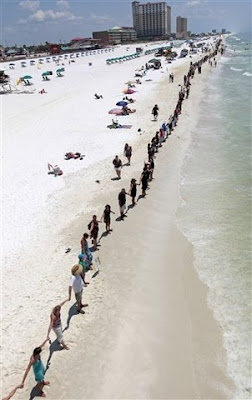 PENSACOLA BEACH, Fla. (AP) — Hundreds of people including Florida's governor joined hands on an oil-stained strip of beach in the Florida Panhandle as part of an international demonstration against offshore drilling Saturday.

Organizers of "Hands Across the Sand" said similar protests were held at beaches around the nation and in several foreign countries.

The demonstration also was intended to show support for clean alternatives to fossil fuels.

Gov. Charlie Crist returned to Pensacola Beach, where he walked with President Barack Obama on the snow white sand June 15. That was before gobs of goo from the BP oil spill in the Gulf of Mexico came ashore last week.

Michael DeMaria, a clinical psychologist from Pensacola, led demonstrators from a pavilion to the shore like an environmentalist pied piper, tooting softly on a native American-style flute. He said he often tells patients to go swimming in the Gulf as part of therapy.

"It breaks my heart," DeMaria said of the spill. "It's amazing how healing just being by the water is."

A barefoot Crist held hands with his wife, Carole, and Joan Jackson, a middle school teacher in nearby Pace.

Dozens frolicked in the water, and Crist, who wore shorts, waded a few feet in as the demonstration broke up. He assured people the water was safe.

"I'm not convinced," Jackson said, adding that she's worried about adverse health effects from chemical dispersants used to break up the oil at sea.