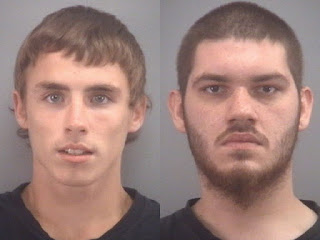 John Sobran, 19, of Virginia Beach, has been charged with stealing the gun with the intent to sell it, discharging a firearm in public, removing a firearm serial number, entering a motor vehicle (where he allegedly found the gun), and conspiring to trespass.

Gary King, also 19, of Virginia Beach, allegedly purchased the gun from Sobran. When he was arrested, he had the stolen firearm in the possession. He was charged with receipt of a stolen firearm and removal of a firearm serial number.

The officer had been visiting from Delaware when the gun was stolen from a parked car in front of a residence. The officer's badge and the gun holster were found near the car.