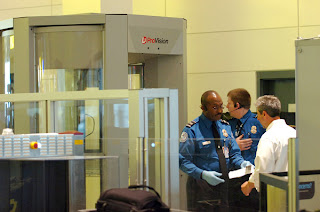 The chances the government will ask to see through your clothing before you board a plane at BWI Marshall Airport will be a lot higher starting tomorrow.

Advanced imaging technology, which until now has been used as a backup method for screening passengers at BWI, will become a routine matter this week, according to the Transportation Security Administration.

The difference will be subtle at first. TSA spokeswoman Lauren Gaches said the four advanced screening machines now deployed at the airport will each be moved about 5 feet forward at their security checkpoints. Instead of a limited number of passengers being pulled from the herd at random and asked to go through the machines as a secondary screening, the imaging will now be the primary method.

"It will be the first technology for the passengers that they encounter," said Gaches, who could not give an estimate of the percentage of passengers who will be directed to the machines but said it would be higher than the current numbers.

The move is part of a gradual shift toward making the more revealing technology, which the government considers superior for its ability to detect non-metallic and well as metallic "threat items," the gold standard of security screening at U.S. airports.

There are now about 80 of the advanced imaging machines deployed at U.S. airports, but the TSA expects to have about 450 by the end of the year. And BWI is expected to get its share of that increase.

As of now, passengers will not be required to go through the machines if they object. Those who don't want to be screened that way can say no, but they can expect to receive a pat-down search as well as the familiar metal detector screening. That isn't a change from current procedure for those who decline, but more passengers will be confronted with the choice of what critics have called an "electronic strip search" or a manual exploration by a TSA officer.

Those who choose the machine will have images of their bodies transmitted to a computer screen in a small, stark, windowless room off the checkpoint where a TSA officer will view the shadowy images with facial features blurred over.

At a screening demonstration on Monday at BWI, a TSA volunteer passed through an imaging machine at Pier B, which like the others at BWI uses millimeter-wave technology.

Looking at the image, it was possible to determine the gender and general shape of the female volunteer, as well as the suspicious item strapped to her waist, but there was nothing titillating about the display. It resembled a full-body X-ray, though the millimeter wave technology uses radio waves rather than penetrating radiation.

According to Gaches, the TSA officer in the room never sees the passenger passing through the machine, and the officers dealing with the passengers never see the images of those they encounter face-to-face. She said the radiation from the millimeter wave machines amounts to about one-10,000th of that emitted by a cell phone. The images are permanently deleted once the screening is over, Gaches said.

Despite the TSA's well-publicized precautions, the use of the technology has drawn criticism from privacy advocates and others since it was first introduced in 2007. The Electronic Privacy Information Center and Ralph Nader have urged Congress to suspend the practice, contending the technology is ineffective, too costly and unnecessarily intrusive. EPIC is suing the department in an effort to gain access to documents concerning the scanners.

But the TSA and its parent Department of Homeland Security have rejected such arguments and have intensified their efforts to implement the technology after an attempt to blow up an airliner approaching Detroit last Christmas Day.

For many passengers, privacy concerns take a back seat to worries about the time it takes to get through the checkpoints. Gaches said the TSA does not expect the use of the scanners to add time to the process, and some passengers who went through the devices said they thought it went faster than the alternatives.

However, the advanced imaging procedure does not eliminate the step in the screening process where passengers kick off their shoes for screening with carry-on luggage. That remains unchanged.

Gaches said the first machine will be moved into the primary position Tuesday at Pier A. The two at Pier B and the one at Pier D will be moved by the end of the week, she said.

Passengers who were randomly selected to go through the imaging machines today saw no problems doing so.

"If it works to do what they want it to do, then it's fine," said Nanette Ackerman of Coconut Creek, Fla.

Tara Adlesic of Ellicott City went through whole-body screening for the first time and said it didn't bother her.

"It's probably less intrusive than to have somebody pat you down," she said.
www.baltimoresun.com
Posted by jmmb at 6:33 PM