SAN DIEGO, CA, June 7, 2010… Surf dog Ricochet, the SURFice dog who raised almost $30,000 for charitable causes in the last eight months, teamed up with Leash Your Fitness to raise funds for the "Let's Move Together" arthritis walk this past Saturday. Together, they raised over $10,640 in donations, and increased awareness of the disease which affects both humans and canines. The walk was held at the NTC Promenade at Liberty Station. 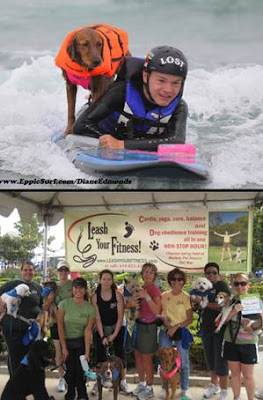 Leash Your Fitness, the only workout class in San Diego where your dog is your workout partner, co-sponsored the 12 member "Leash Your Fitness with Kima" team. Ricochet joined the team because her guardian and Handler, Judy Fridono has been suffering with arthritis since she was a teenager, and because there are so many dogs affected by this debilitating disease. Ricochet fundraised in earnest during the week leading up to the walk, and many of the donations came from her 8100+ incredibly supportive Facebook fans who were touched by her inspirational video.

Due to the support of her donors, Ricochet was the 2nd top overall fundraiser of the 2010 eighth annual walk in San Diego, raising more than $5480 in donations. In fact, two of the top fundraisers for all of San Diego were dogs Ricochet and Kima! Kima, the arthritis walk honoree dog chair came in third place overall.

Ricochet was the top fundraiser on the "Leash Your Fitness With Kima" team. And, the team came in second place overall as the top fundraising team for this year's walk with all members making a significant impact.

Leash Your Fitness also had incentives to help motivate individuals to join their team... including six weeks of FREE training. The team met weekly at various parks throughout San Diego for one-hour "walk the circuit" classes, which incorporated upper body strength and core exercises, balance, yoga and dog obedience. The team training was designed to build endurance for the three-mile walk, all while preparing dogs to walk in a group setting. For more information on Leash Your Fitness ongoing classes, visit http://www.leashyourfitness.com/index.htm

Ricochet, and Leash Your Fitness are thrilled with the results of their fundraising, and sincerely thank all their supporters and donors. They will continue to raise awareness for both humans and canines who suffer from this disease.