Drag Racer Killed During Qualifying Round 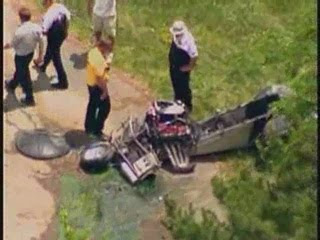 OLD BRIDGE, N.J. (AP) - A drag racing driver ran through a net at the end of a track and died of head injuries in a crash during a qualifying round at the NHRA SuperNationals at a New Jersey raceway Friday, state police said.

The driver, whose name has not been released, crashed at Raceway Park in Old Bridge, N.J., Sgt. Stephen Jones said.

According to the organizer's website, Sportsman qualifying was under way at the time of the accident.

The incident comes nearly two years after top racer Scott Kalitta died when his Funny Car burst into flames and crashed at the end of the track in central New Jersey.

Kalitta's Toyota Solara was traveling at about 300 mph when it burst into flames.

In February, a spectator died after being hit by a tire from a crashing dragster at the NHRA Arizona Nationals. The woman was watching a first-round Top Fuel run when Antron Brown's Matco Tools/U.S. Army dragster went out of control on the strip and its left rear wheel came off.
www.wavy.com
Posted by jmmb at 10:39 AM