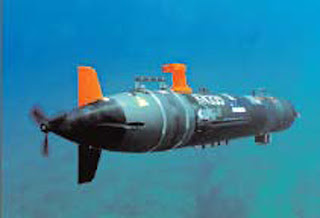 The Navy, Coast Guard and local authorities were searching for the missing vehicles in the Thimble Shoals Channel between the Hampton Roads Bridge-Tunnel and the Chesapeake Bay Bridge-Tunnel, a Navy news release said.

Communication was lost with four of the 13 unmanned vehicles Sunday about 1 p.m. while the vehicles were using bottom-mapping sonar to look for mine-like contacts in the water as part of the training. Search and recovery operations began immediately.

The cause of the vehicles’ disappearance is under investigation. The missing vehicles do not pose a danger to civilians or the environment, the Navy release said, but if an unmanned vehicle is discovered floating in the water, boaters should avoid it as they would any other navigation hazard.

www.hamptonroads.com
Posted by jmmb at 1:54 PM