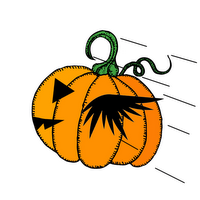 When it comes to performing before large outdoor crowds, Discovery Channel's "Mythbusters" hosts Adam Savage and Jamie Hyneman have some experience.

After all, it was just last weekend when the duo warmed up the crowd at Jon Stewart and Stephen Colbert's "Rally to Restore Sanity and/or Fear" in Washington D.C.

On that day, aerial photography analysis commissioned by CBS News estimated that the rally drew about 215,000. So when Savage and Hyneman host this weekend's Punkin Chunkin, which drew about 80,000 people last year, their nerves should be calm.

With about 115 teams competing in the pumpkin-flinging event and Discovery Channel television crews crawling across the Wheatley farm working on this year's specials, Punkin Chunkin Association spokesman Frank Shade has a prediction for this weekend: "Absolute chaos -- controlled mayhem."

For the third year in a row, Discovery Networks will produce a special at this weekend's event to be simulcasted Thanksgiving night on both the Discovery and Science channels with Savage and Hyneman serving as hosts. A one-hour "Road to Punkin Chunkin" documentary will air the night before, Nov. 24, on the Science Channel. 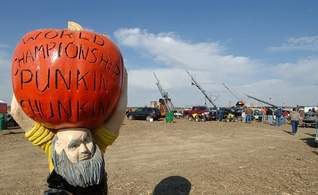 "Next to football games, turkey and pumpkin pie, Punkin Chunkin is a national Thanksgiving tradition," Clark Bunting, Discovery Channel president and general manager said in a statement announcing this year's programming, which will be filmed at the event site near Bridgeville at the Wheatley Farm.

It's hard to underestimate the power of the Discovery Channel exposure for Delaware's quirkiest event, which officially kicks off Friday at 7:30 a.m. and ends at 5 p.m. Sunday with the naming of this year's champion. Before 2008, the event drew about 30,000 to 50,000 spectators. Last year's record crowd of 80,000 is expected to be surpassed this year.

"We could go well into six digits," Shade predicted. "The Discovery folks have put us over the top."

Mike Sorensen, executive producer of the Science Channel's Punkin Chunkin specials, said last year's Punkin Chunkin coverage was the highest-rated special in the channel's history, drawing in plenty viewers across the country to watch what was once Delaware's own secret. 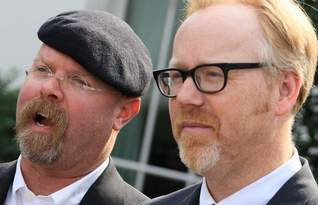 "It's American ingenuity at its best," Sorensen said. "People get a peek into this world. The machines are incredible. The people are great. And they are really into it, fighting for bragging rights."

This year, the television crew for the specials have doubled to about 40 people, he said, adding that slow motion cameras and new technology usually used to track golf balls for television audiences will be used for the pumpkins for the first time.

Punkin Chunkin's relationship with Discovery goes back to 2003, when the cable network first produced its first pumpkin-filled hour-long special. Back then, about 65 machines competed in front of about 25,000 people. The television exposure wasn't completely new. In the mid-'90s, "The Late Show with David Letterman" famously flung pumpkins down 52nd Street in Manhattan and several cable networks have aired segments on the event over the years. 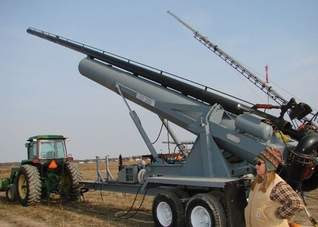 Sorensen said Savage and Hyneman are perfect to host Punkin Chunkin and the pair will lean on their own engineering expertise while inspecting the machines and interviewing participants.

"This is absolutely their territory and their crowd," he said. "Their engineering knowledge is unmatched. And I think once we get them with the characters there and their machines, it'll be such a great fit. This event was really made for these guys."

WHEN: Friday through Sunday, with the winner announced at 5 p.m. Sunday

WHERE: The Wheatley farm near Bridgeville. From U.S. 113, take Del. 40 (Redden Road) west to Chaplain's Chapel Road. Turn left, and the site is straight ahead on the right.

COST: Admission is $9 per adult and $2 parking per vehicle. Children under 10 are free.

If you have never been to this I strongly suggest you make an effort to attend. This event has no purpose other than to get people to eat lots of food, watch silly men and women doing highly amusing things with funny shaped fruit, buy strange tee shirts and see how many of your neighbors are there. It has no redeeming social value and I wouldn't want it any other way.

Who would have thought 25 years ago punkin chunkin would be this popular?

Wonder how much revenue it brings to the area?

And for those that have never been find someone that has and ask them about it........