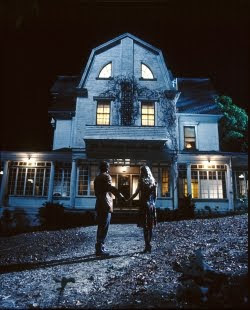 AMITYVILLE, N.Y. (AP) — The owner of the New York house made famous in the 1979 film "The Amityville Horror" is holding a moving sale.

The five-bedroom Dutch Colonial on Long Island has been on the market since May for $1.15 million and is under contract. Owner Brian Wilson is holding a moving sale Saturday. Items include furniture and exercise equipment, not loot from the house's infamous past.

The Oscar-nominated film is based on the story of the Lutz family's brief stay in the house in 1975 after six members of the DeFeo family were shot and killed as they slept. Oldest son Ronald DeFeo Jr. was convicted.

The crime spawned a book and a series of movies that chronicled various supernatural horrors, including visions of walls oozing slime and moving furniture.
www.baltimoresun.com
Posted by jmmb at 7:30 AM