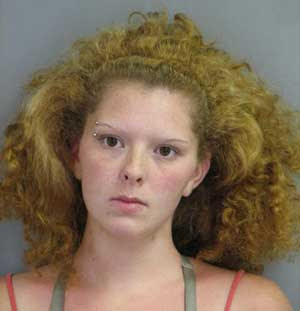 SEAFORD, Del.- Seaford police say an 18-year-old woman is facing charges after her 3-year-old son fired two shots from a .410 shotgun, which struck the roll-up door of a firehouse.

Christy A. Smullen is charged with tampering with physical evidence, reckless endangering, possession of a firearm by a person prohibited, endangering the welfare of a child, criminal mischief over $1,000 and discharging a weapon in city limits. She was released on $8,000 unsecured bail, pending a preliminary hearing in the Court of Common Pleas.

It happened about 2:10 p.m. Wednesday when officers received a report that the Seaford Volunteer Fire Department was being shot at. When officers arrived on the scene, they found two bullet holes in a roll-up door on the west side of the firehouse.

Police say an investigation showed that a 3-year-old boy on a porch across the street had gotten the unsecured loaded shotgun from the home and fired at the firehouse.

Smullen, who is the boy's mother, was taken into custody and arrested on the aforementioned charges. Police say the shotgun was also recovered from the home and found to have been loaded with .38-caliber ammunition.

Seaford police detectives executed a search warrant at the home on the 200 block of Cannon Street where they located additional ammunition and a BB gun.

The Delaware Division of Family Services also responded and placed the child with his father.

The Daily Times has an article on this and supposedly the 3 yr old went into the closet, retrieved the shotgun, LOADED IT WITH AMMO HIMSELF and proceeded to go outside and shoot it.