The mudbog we have all been waiting for will be held this weekend in Crisfield, Maryland!


~NIGHT RACE~
Information for the event  will be posted today!
Posted by jmmb at 7:05 AM No comments:

The second mud bog took us to Crisfield on Sunday  May 27.  What a crowd!  Seems like the idea to add more bleachers this season was a most wonderful thought!  What a HUGE crowd of spectators and they seemed to enjoy every minute of the race day. 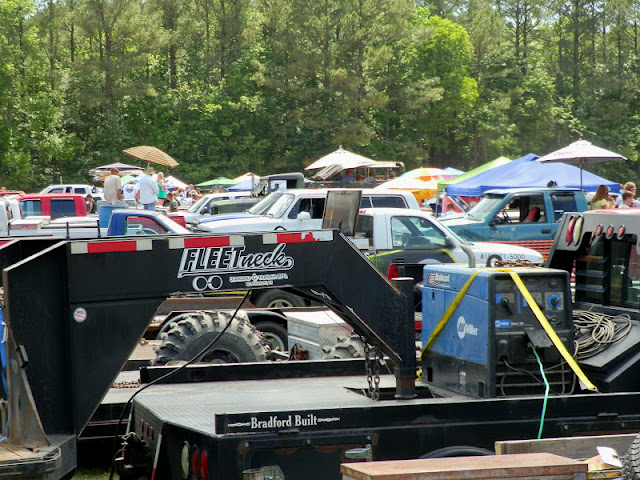 Most people know that Crisfield is my most favorite place to race...for alot of reasons....one being that Crisfield has been in my heart for many years.
When you are married to or related to someone that races through the mud and is dedicated to the hobby you know all about the early morning hours and the length of time it takes to prepare for the day "in the pits".  But because I'm nosey getting there early is fine with me. 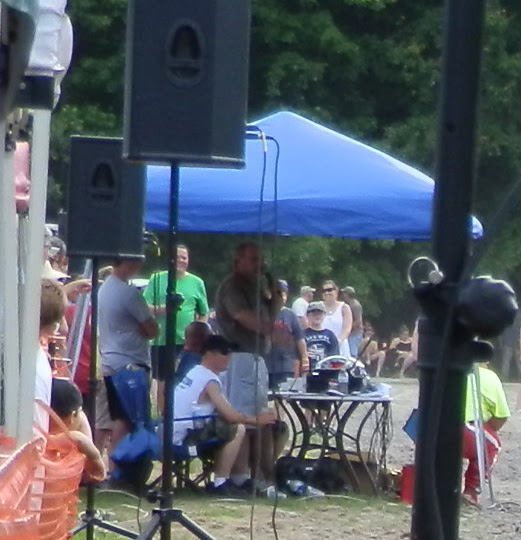 Probably the greatest suprise on Sunday was knowing the Buddy Ward would be our "sportscaster" for the day!  This was his first time for announcing the races and Buddy did a wonderful job!  Being able to hear when you are in the pits isn't easy and most times, even when paying attention, you just cannot hear.  Thanks Buddy for placing a speaker in the pit area.  Buddy gave us great announcing all day long and  a music selection that was woth listening to! (I despise twangy country music)
Be sure to tell Buddy how much you appreciated him taking on  that rather difficult task of announcing ALL day long.
Race preparation is not easy- especially on hot days.  Most trucks begin with a spotless truck.  If you have never washed a muddy truck you have NO idea what washing a vehicle means.  But for those who love the sport is worth the time.... and so is changing tires.......
﻿ ﻿
﻿﻿ More to be posted..........﻿﻿
Posted by jmmb at 10:11 AM No comments:

Saturday, September 3, 2011- The mudbogging on Saturday concluded the events that were scheduled in Crisfield for the season.  The remaining scheduled mud bog events will be held in Gumboro.
That Saturday wasn't much different from any race day that all of us had attended before.
As usual before any mudding begins each truck is spic and span clean but only because the trucks were washed until every trace of mud was removed.  Unless you have washed one of these muddied truck you have NO clue the time it can take even with power washing.
But that's part of loving to race in the mud. 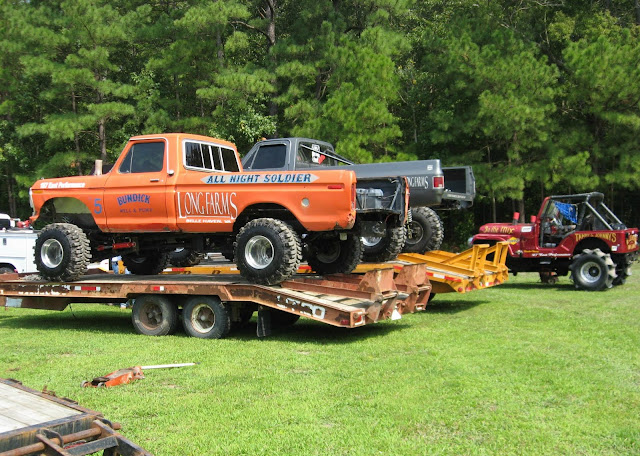 Lined up before race time: 'All Night Soldier', 'The Grey Ghost', 'In The Mix'

'All Night Soldier' with driver Patrick Long and 'The Grey Ghost' with drivers Lori Ann Sturgis and Lee Sturgis had a great racing day on Saturday. 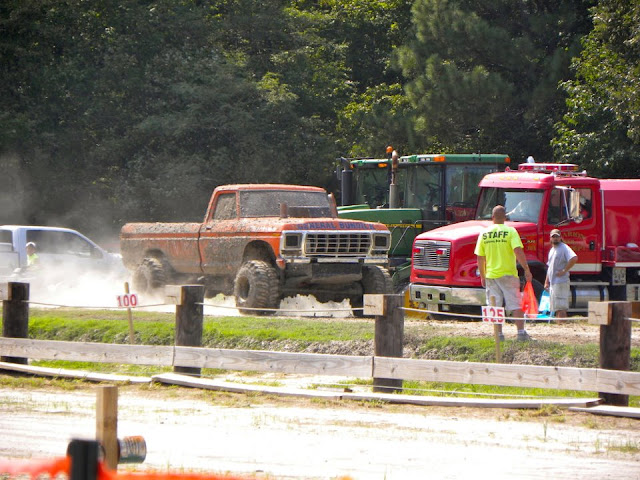 This is what Patrick Long had to say;
"Had good weekend at Crisfield Mud bog, I took a 3rd, my brother in law took a 3rd driving his truck Grey Ghost and my sister took a 3rd driving Grey Ghost, pretty good for first time out after The Metal Shop put new suspension under the Grey Ghost."
And he's right!  'The Grey Ghost' did have an awesome day for it's first time out.  Personally, the condition of the mud kept alot of trucks slowed even this one.  But I have to give Lori Ann a big pat on the back because she did an awesome job!!  - Sorry guys.
Here are some photos of the brand new suspension under 'The Grey Ghost'.  My question is will they ever begin to squeak?  The truck looks great!  and if you are thinking about a  new suspension for your truck the website address is on the bumper of 'The Grey Ghost'.  - Clever idea.  http://www.themetalshopfab.com/ 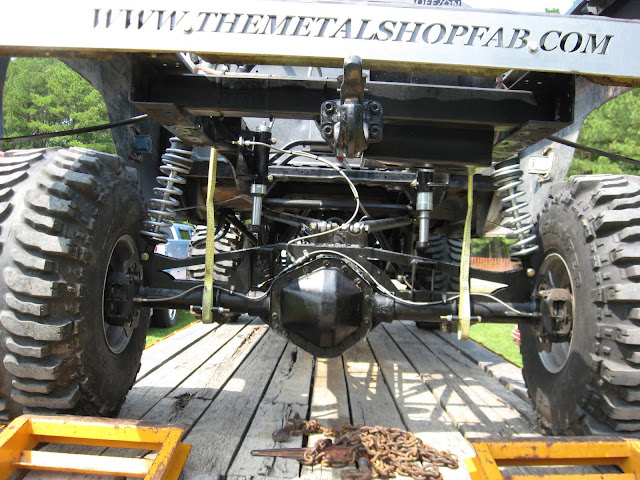 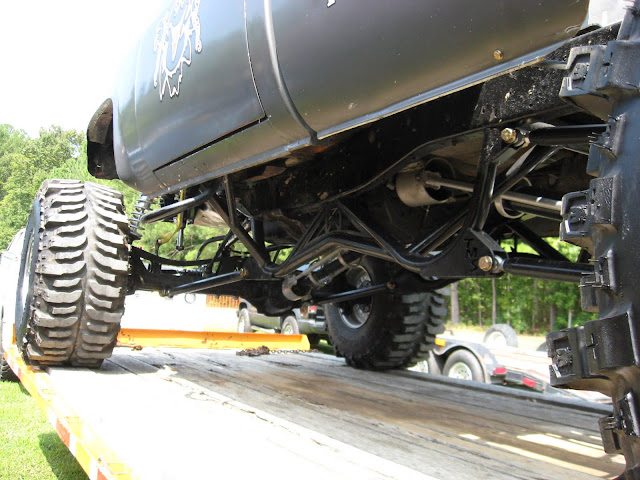 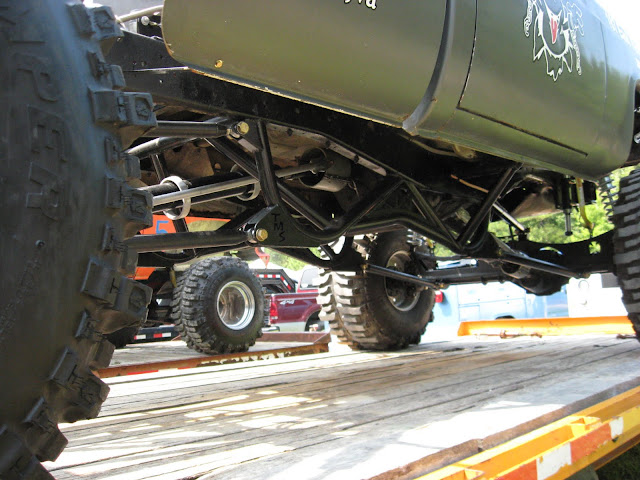 Lori Ann - only one of two female drivers on Satuday, does a wonderful job traveling through mud!
She's just not afraid of anything when it comes to racing.
Lori Ann
And neither is Lee...............
Lee
Great job Lori Ann, Lee and Patrick!
More photos and video to come...........
Posted by jmmb at 12:32 PM 3 comments:

The banner across the windshield of "The Gray Ghost" reads 'drive it like u stole it' which is something that has always been told to the drivers of the Bowden Racing Team.
And that's what the drivers try to do every time they meet the muddy pit face to face.

However, it's important for everyone to understand that mud sometimes has a mind of it's own.
Lee Sturgis, behind the wheel of "The Grey Ghost" seemed to have no problem heeding  the  'drive it like u stole it' advice on Sunday, May 29, 2011 in Crisfield, Md.
Lee and "The Grey Ghost" ended with a great run!
Unfortunately, there is no advice on a fast, easy way to remove the dried,  caked on mud that gets carried home.
Posted by jmmb at 8:26 AM No comments: