THE GAMBLER'S RACE
This is a winner take all race where the drivers dial in what time they think it will take them to finish getting through 150 ft. of mud!  The jackpot grew rapidly once again and before we knew it $2,000.00 was the winning amount!!  The spectators love this - and so do the drivers!
The winner of the Gambler's Race at he Crisfield Mud Bog on Sept. 1 was
SAM JONES DRIVING "DIRTY DREAMS"
Sam was only 0.09 off from his dial in time
﻿﻿
﻿﻿ 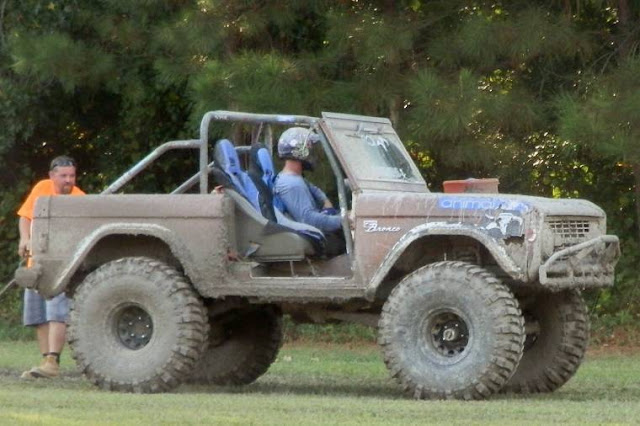 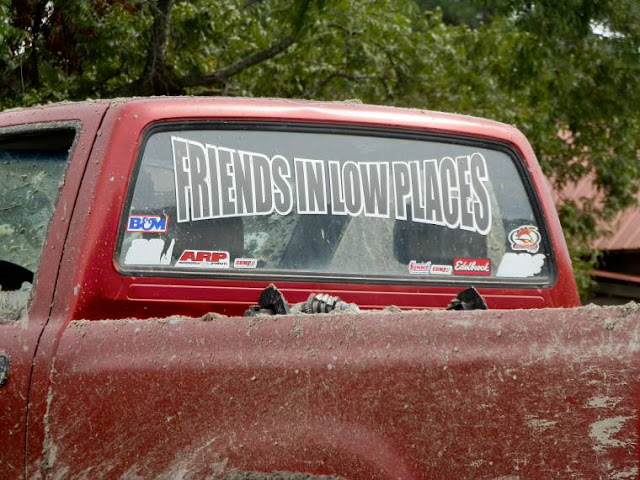 For information and directions go to www.gumborocrisfieldmudbogs.net
Always looking for new info......
Contact me if you'd like to share.
Posted by jmmb at 4:49 PM No comments:

If you are familiar with Labor Day tradition in Crisfield then you know nothing gets started until after the famous and fun Crab Derby Parade- not even mud bogging.  The races started just a few minutes late but not enough for anyone to notice unless you were paying attention to the clock.
It is estimated that  Crisfield  mud bog drew at least 1,000 spectators.  And at one point the cars were lined along the shoulder of the road waiting to pay admission into the mud bog.That's not bad at all considering the holiday and all the events happening in town.  These fans are very dedicated mud bog fans!  Much appreciation needs to be given to them for attending race after race and especially for coping with the HOT temperatures on this day.  In fact, I believe, it was hotter than HOT. 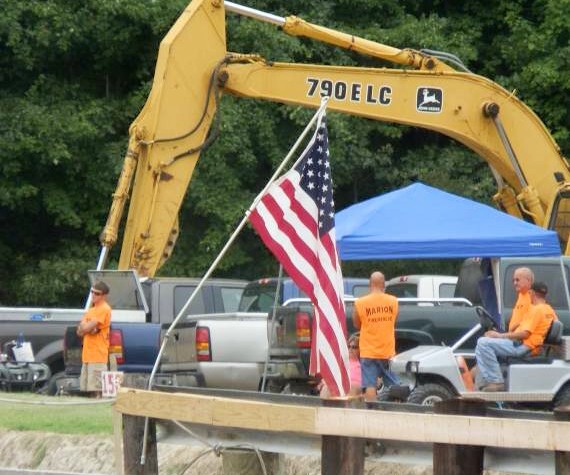 The most welcomed person of the day had to be the young man walking around the grounds selling lemonade.  Hope you bought some of it because it was delicious and just hit the spot on such a hot and humid racing afternoon!  The poor guy walked all day offering his wares and when I met up with him later in the day he looked pooped!  I certainly hope someone gave him a nice dinner and he got some much needed rest.
As of this post the race results and points have not been posted on the official Crisfield/Gumboro website.  So until I have that information here are a couple of videos and some photos from the mud bug along with what  information I have.  If you have any info you would like to share email me.  My email address is listed on this blog.
"Short and Sassy"
Owner/Driver Barry Wise 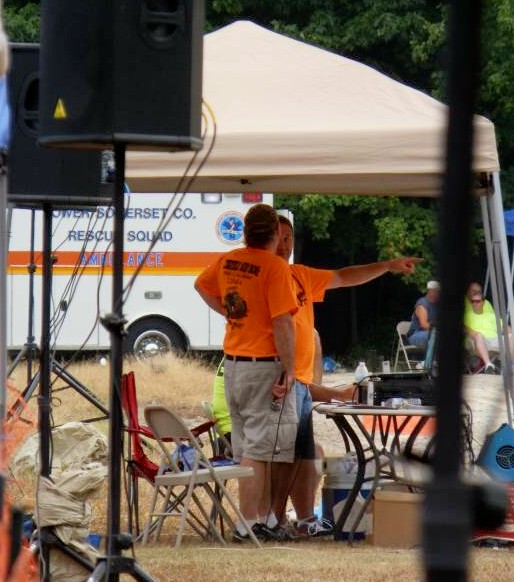 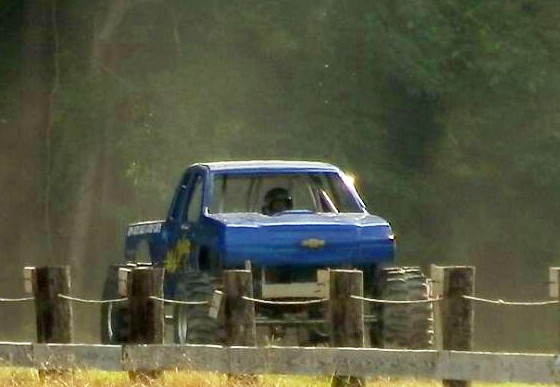 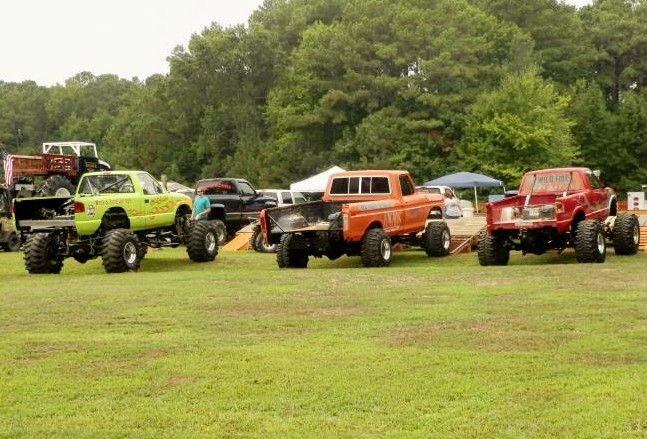 "Sod Buster"/Driver Barry Long
"All Night Soldier"/Driver Patrick Long
"Wildfire"/Driver Donald Bowden
I'll be back with more photos and video and the name of the winner in the "Gambler's Race".
Posted by jmmb at 4:59 PM No comments: 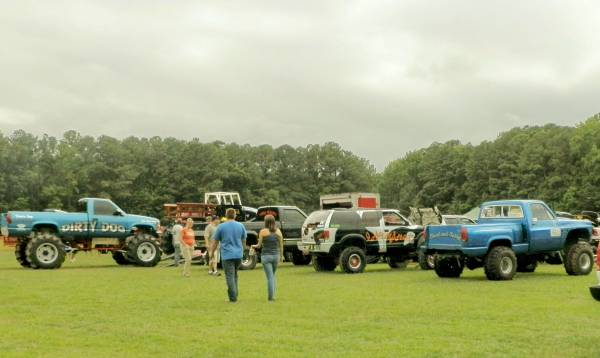 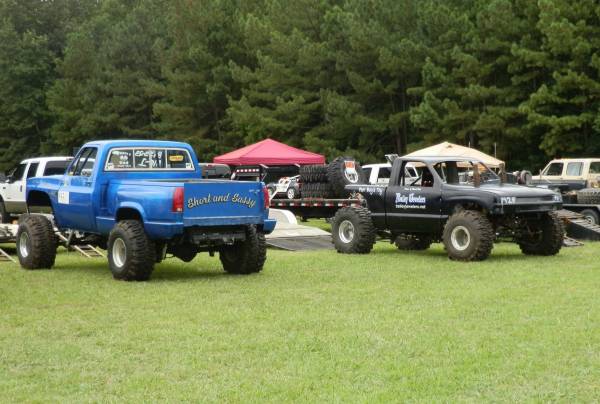 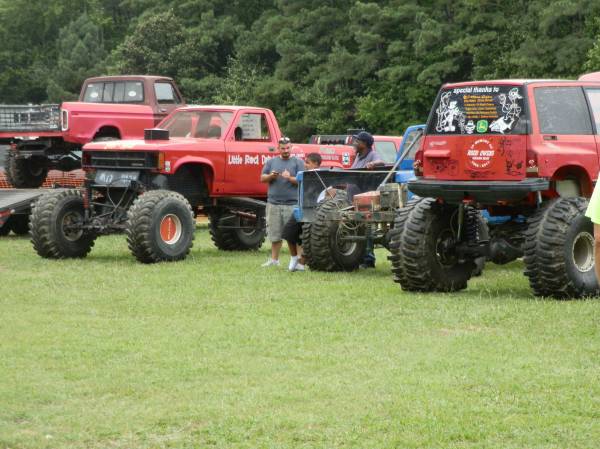 Winner of the Gambler's Race at the July 21st night race was Bryan Watson driving "Little Red Dakota".  Bryan made the run in 3.12 seconds !! 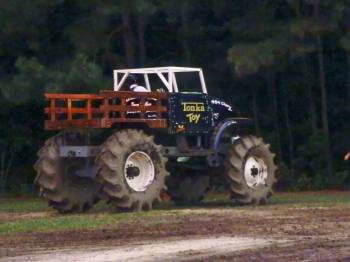 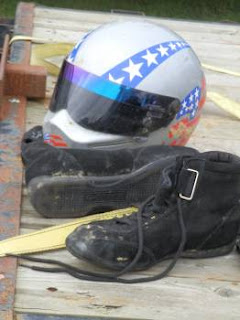 HOPE TO SEE YOU THERE!!!
**This will be the last race to be held in Crisfield for the season. Last race of the season will be held at Gumboro**
Posted by jmmb at 9:00 PM No comments: 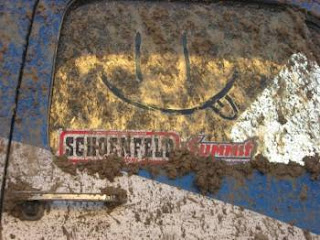 Announcer for the race events will be Buddy Ward!  And there's going to be plenty to talk about!
The events of Saturday's races will feature a $1,000 purse for the driver in ANY class that is CLOSEST TO 5 SECONDS! 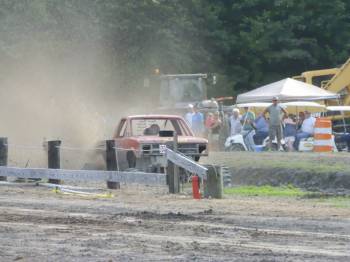 ***All proceeds will benefit the Crisfield Elks Lodge
and the Marion Vol. Fire Dept.***

For more information and rules go to: gumborocrisfieldmudbogs.net

And one more IMPORTANT thing to remember! 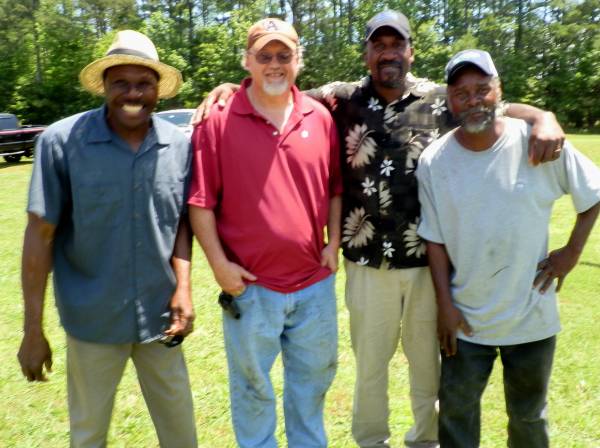 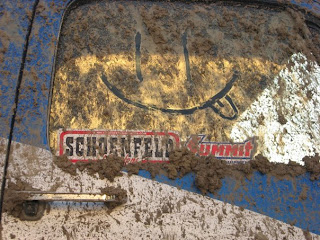 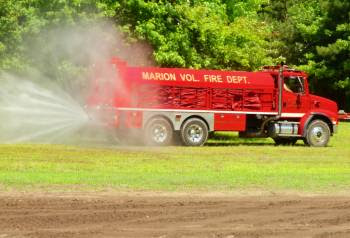 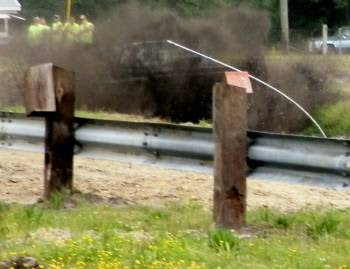 The mudbog we have all been waiting for will be held this weekend in Crisfield, Maryland!


~NIGHT RACE~
Information for the event  will be posted today!
Posted by jmmb at 7:05 AM No comments:

It always seems to happen at least a couple time during the mud bog season when the joy of a fast fun turn into a nightmare for everyone - especially for the drive.

Blaine Hitchens driving his truck "Rare Species" Blaine had just completed a 3.0 run through the mud when he excelerated causing his truck to swerve the hit the trees, wiped out the new digital timing board, turned over and finally came to a rest on its top.

In his introduction it was stated that the engine alone in this truck cost to the tune of at least $70,000.....maybe more. - That's not counting the body work.

Thankfully Blaine had no injuries- except pride and we all know how easily that gets damaged for some of these drivers. Goes with the sport.

Watch what happens when the truck finally comes to a stop. Be sure to play close attention to the first to arrive to Blaine's aid...... (no matter who the racer is he just arrives before anyone else)

(Thank you, Patrick)
And thank you to the Lower Shore Ambulance
(one of the nicest things about mud bogging in Crisfield) 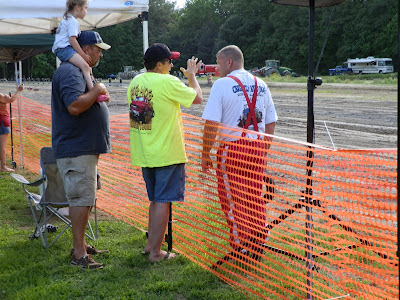 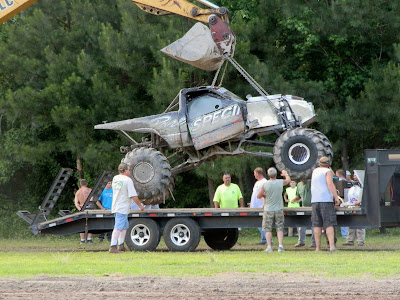 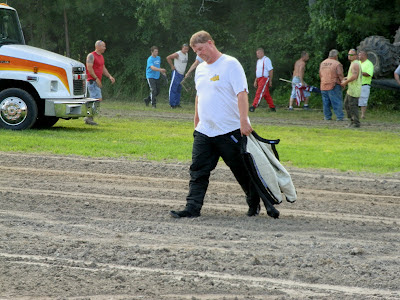 Mud Bog Races will return to Crisfield in July for a night race.
That should be lots of fun - never been tried before.......don't miss it.
Posted by jmmb at 7:05 AM 5 comments:

Opening day of the Gumboro/Crisfield Mud Bog Season
A few things were a little different for the first mud bog race of the season.  Barry Long, driver of "Sod Buster"  was sidelined due to a  knee injury.  This left only one other person to drive that mud truck..his son and  my "go to guy" Patrick Long,  who has always driven his very own truck "All Night Soldier". 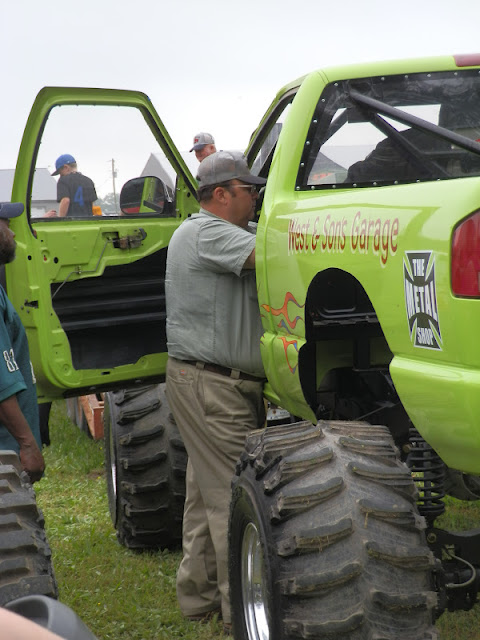 Patrick drove the "Sod Buster" in two classes on Saturday:
Mini Open/ 4.27 seconds  and Unlimited Class/ 4.38 seconds
(Viedeo: Not sure which class this is)
MORE PHOTOS FROM SATURDAY 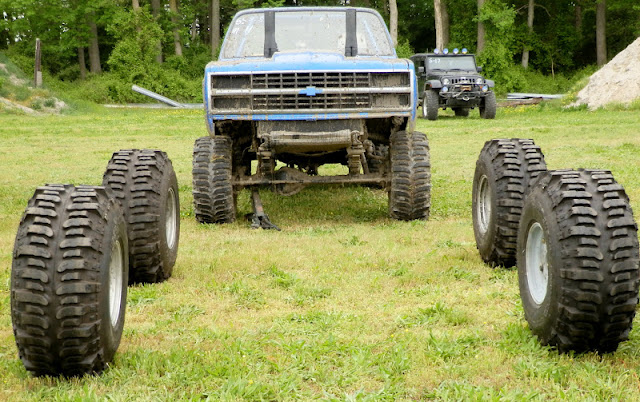 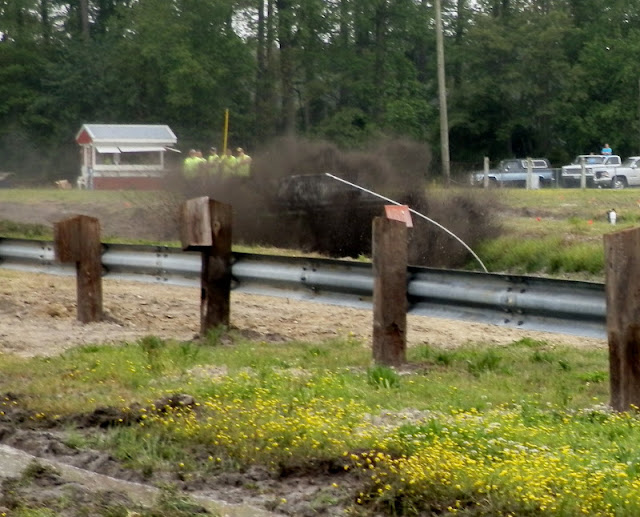 Gumboro/Crisfield Mudbogs opened the 2012 season on Saturday under foggy skies but the weather didn't seem to put a damper on the amount of mud trucks anxiously awaiting opening day.

But first here's something that, in my opinion, you need to know.

After very successful pass through 200 feet of mud Charlie Price, driver of "Midnight Express",  stopped his truck, removed his helmet and presented it to someone in the granstands.  During the remainder of the race day Charlie's helmet was passed around in the grandstands and pit area to collect funds for the Mike Brittingham family.

﻿﻿ ﻿﻿
For those who may not know,  "Mike" Brittingham  was killed in a vehicle accident a few weeks ago.  He was an avid fan of mudracing and  Mike's untimely death  leaves behind a wife and four young children.  Funds collected will go into a trust fund for Mike's  children.
GREAT JOB, CHARLIE !
Posted by jmmb at 9:02 AM No comments:

Changes have been made in the 2012 mudbog  racing schedule.
Please note the following changes in dates. 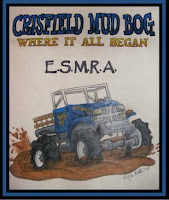 REMINDER
There are still a few racers and crew members that have not reserved their tickets for the 2011 Banquet.
DEADLINE for purchasing tickets is Wednesday March 14, 2012
This years banquet will be held at the Crisfield Elks.
To reserve your spot and for tickets contact Charlie Price. 410-330-6571 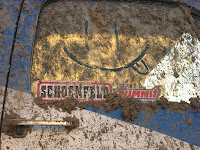 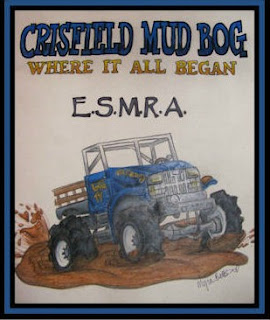 Reminder to racers:  Banquet tickets must be purchased  MARCH 14 for the 2011 Mudbog Banquet being held on March 31st at the Crisfield Elks.  Awards will be given out the evening of the banquet.  Contact Charlie Price for tickets.
Posted by jmmb at 7:10 AM No comments:

ATTENTION 187 East Performance Mud Bogging Team and ALL Mud Boggers out there !

My "go to guy" Patrick Long/driver of  "All Night Soldier" has just informed me that the 2012 Crisfield Mud Bog Schedule will be:

Added class this year will be BLOWN TRACTOR TIRE CLASS

Lots going on and I'm sure all of us will be anxious to experience the race under the lights! 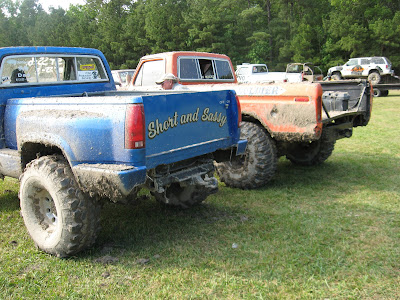 This is great news!  Get your trucks ready....
"Short and Sassy"/ driver Barry Wise - is in the process of having some new features installed.
"All Night Soldier"/ driver Patrick Long- reports that there is alot to do with the three truck in his area!
In the meantime this will give me the chance to finish with the 2011 year of racing so stand by for the photos and racing  fun I never got the chance to post.
Posted by jmmb at 5:33 PM No comments: