Aquarium Comes To Life At Delmarva Discovery Center In Pocomoke 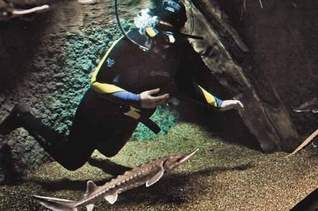 POCOMOKE CITY -- The final step in the installation of Delmarva Discovery Center's 6,000-gallon freshwater aquarium is just days away.

A dedication ceremony for the aquarium is scheduled for Oct. 21 from 6-8 p.m. and will call attention to a $250,000 grant from the Fulton Owen Foundation, which made the purchase and operation of the tank possible.

Staff and volunteers are ready to show off the exhibit to the public, after working to install the tank and prep and introduce the fish to their new habitat.

"(The tank) is a great opportunity to highlight the ecology of the Pocomoke River and the unique fish that live in it," says Executive Director Brian Garrett. "We just want to recognize their generous donation and acknowledge the positive impact it's having on the discovery center."

The ceremony will include a speech by Garrett, in addition to a presentation of the tank, acknowledgment of the donors, a short speech by representatives of the Snow Hill-based Fulton Owen Foundation and a casual reception.

The tank is designed to look similar to the underwater world of the Pocomoke River and has been stocked with native fish, including Atlantic sturgeon, largemouth bass, channel catfish and bluegills.

Garrett expects the tank to increase learning opportunities for area residents as well as the attractiveness of Pocomoke City as a regional tourist destination.

After the ceremony has ended, staff at the Discovery Center are expected to get to work on their next big project. The University of Maryland Eastern Shore recently donated a 1,500 gallon tank for a Chesapeake Bay ecological exhibit.

Garrett says before moving forward on that, the Discovery Center needs to secure additional funding, to ensure once the tank is installed there will be enough money to keep it operational and allow for the care of marine life.

#1. 3,600 admissions June through August? That's 47 people average every day, Monday through Saturday. Have you ever seen ten people at this place, much less 47?

Anon 12:06. I guess you haven't been paying attention. This "turkey" (as you name it)is paid for partly through grants and donations.

You would be surprised to see the number of local youth that volunteer their time whenever they can.

You would also be surprised to actually know that there are quite alot of people that visit the center. If you have never been I suggest you visit.

Maybe you will then be able to feel differently about the finances that it takes to run the center. Rest assured that it is in capable hands and should do very well..........

Let's see, they just got $650k to build a restaurant and close off the street (Ask the Lambertson's how much it cost to build the Greene Turtle)and then they are going to try and get some poor schmuck to bid on running restaurant that in the end is controlled by the city.
And lets not forget that poor Mr. Garret was before the city in March asking the city to subsidize $40k in salaries and the entire power bill for the year. The city agreed and also increased the rent from $1 to $5, just to make sure they are getting their money's worth.
Oh, and don't forget about the original 8mill in combined grants for feasibility studies and architectural consults and a $250k roof, then the rehab construction.
AW and Jenny can donate to anything that they wish, and God Bless them for doing so, but in these economic times it certainly seems like a lotta money to me and it's coming out of the pockets of every Worcester property owner, and state resident.

I personally do not mind my tax money funding projects such as the Delmarva Discovery Center. I approve of tax dollars going to anything that promotes history and is educational.

If you like your money going to historical or educational projects then send YOUR money, not MINE. It is not the place of government to decide what people should like or do. I prefer my money going to liquor, cigarettes and cheap women. Why shouldn't the government cater to my desires as much as yours?

2:00 you do not think it's the government place to fund educational projects?
BTW-the govenment is already funding liquor and cigarettes. That's the problem. Go down into the "hood." You can buy an Independance card for pennies on the dollar. They get the money and then go and buy liquor and cigarettes.

Do you mean should the government subsidize artists, opera, ballet or even the MarVa Theatre? Absolutely not! They don't subsidize Slim Pickens movies so why are the so called fine arts any different? I'll take booze and floozies any day.

SLIMMMMMM, Where have you been?