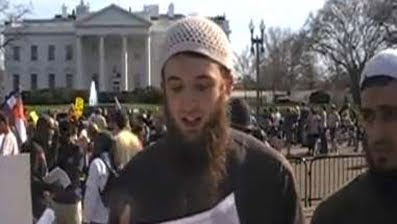 WASHINGTON — Federal prosecutors have brought two new charges against a northern Virginia man accused of offering himself as a fighter to a Somali terror group, and have charged his wife with making a false statement in connection with the case.

Zachary A. Chesser, who was arrested this summer and allegedly told FBI agents he had twice tried to travel to Somalia to join a terror group, was charged Monday in federal court in Virginia with one count of communicating threats and another count of soliciting crimes of violence, both related to his previous case. The new charges carry a total of 15 years in prison.

Chesser, 20, was charged in July with material support to terrorists, which carries a potential 15-year sentence. Chesser acknowledged to FBI agents that he wanted to travel to Somalia to join the al-Qaida-linked terrorist group al-Shabab, according to an FBI affidavit filed this summer.

Before Chesser's arrest this summer, he was best known for posting harshly worded online warnings to the creators of the animated TV show "South Park" that they risked death for mocking the prophet Muhammad.

Chesser's wife, Proscovia Kampire Nzabanita, was also charged Monday with one count of making a false statement, which carries a possible prison sentence of up to eight years. Her charge is related to her husband's case, but it was not clear how.

Chesser and Nzabanita, who is from Uganda, have an infant son whom Chesser tried to take with him on a flight from New York to Uganda this summer in order to appear less suspicious, the affidavit said. Chesser was denied entry to the flight and told he was on the no-fly list. He and his wife had previously tried to go to Somalia by way of Kenya, but that attempt also failed.

After his latest attempt to leave the country, Chesser apparently tried convincing FBI agents he had renounced his extremist views and said he would work for the FBI if the government helped him travel to Africa, according to the affidavit. Instead of accepting Chesser's offer, FBI agents arrested him.

Chesser has not yet been indicted in the case and the timeline for doing so has been extended twice. Lawyers often seek an extension of the indictment deadline to work out details of a plea bargain

An attorney for Chesser, Michael Nachmanoff, said in an e-mail that he could not comment further on the case. An attorney for Nzabanita, David Smith, did not immediately respond to e-mailed requests for comment.