'No Drama' For Maryland Winter This Year- NOAA Says

If you hated last winter's record snowstorms in Maryland, you should be a lot happier with the winter weather predictions rolled out Thursday by government and private forecasters.

The best news is that federal forecasters see no compelling reasons to think we'll stray far from the long-term averages for precipitation and temperatures this winter. Snow totals should look more like Baltimore's 18-inch norm than last year's record 77 inches.

On the other hand, forecasters at AccuWeather.com expect an early start to the cold weather in the Mid-Atlantic states this fall. Later in the winter, said AccuWeather.com's forecasting operations director, Ken Reeves, "you're going to find yourself with … warm air pushing against cold air in the region." That means more "mixy-type storms instead of colder snowstorms."

He guessed 20 inches to 25 inches in all at Baltimore-Washington International Thurgood Marshall Airport. But he said "the bust potential is down rather than up this time," meaning that his estimate is more likely too high than too low.

The National Oceanic and Atmospheric Administration's Climate Prediction Center said the worst of the snow and cold this winter will fall across the northern tier of states, from the Pacific Northwest through the Great Lakes to New England.

Warmer- and drier-than-normal weather is expected across the South, with growing worries about drought conditions developing from Texas to Florida.

The forecast is driven mostly by a strengthening La Nina — a cooling of surface waters in the eastern and central tropical Pacific Ocean.

That has replaced last winter's moderate El Nino, the pattern of above-average sea-surface temperatures that drove winter storms across the southern U.S. and up the East Coast, helping fuel the storms that dropped a staggering 77 inches of snow at BWI.

"In a La Nina, storms track to the west of [the Mid-Atlantic], and history has shown we often do not see a whole lot of snow," said Mike Halpert, deputy director of the Climate Prediction Center. "If I were a betting man, I would be betting against a very snowy winter." 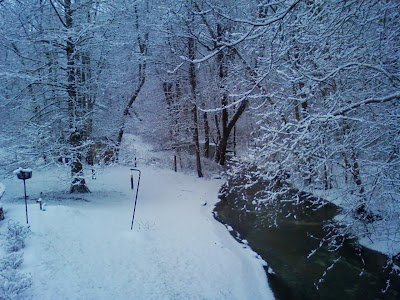 Last winter was 2 degrees lower than the long-term pattern because of sharply colder weather in February. A more nearly "average" winter in the Baltimore region would feel warmer by comparison.
Area consumers could receive a double benefit — milder temperatures and cheaper natural gas. Baltimore Gas and Electric Co. officials said Wednesday that lower natural gas prices this winter should alone save consumers 5 percent on the gas portion of their bills. That works out to about $30 over the five-month heating season.

If AccuWeather.com's forecast proves correct, the snow we get would come early in the season. Joe Bastardi, its chief long-range forecaster, said he expects temperatures in November and December to be near or below normal.

Reeves said that would come with an expected southward dip in the jet stream, down through the Great Lakes into the Mid-Atlantic.

"If we get that kind of flow going, it probably means access to colder air and a chance for … not Snowmageddon 3, but smaller batches of snow moving from west to east," he said.

If nor'easters do form, he said, they would tend to spin up off the Carolina coast without first sweeping up moisture from the Gulf of Mexico. And until we're deep into December, the odds will favor rain over snow.

Come January, the dip in the jet stream will flatten out, Reeves said. And that will mean milder weather. And when such temperatures collide with colder air to the north, Maryland can expect "wintry mix" storms that can slicken roads and bring down power lines without delivering much snow.

If you'd rather have a snowfest this winter, stick with the 2011 Old Farmer's Almanac. Its seers, using sunspot cycles and a strengthening La Nina as their guide, forecast a "cold, snowy" winter for the Mid-Atlantic, with the flakiest times in early January and mid- and late-February.

How reliable are NOAA's Winter Outlooks? The Climate Prediction Center measures its performance with a statistical tool called the "Heidike Skill Score." Negative scores are worse than random guessing. A score of 100 percent is a perfect forecast.

"Our average skill score is somewhere around 20 to 25 percent better than random chance," said Michelle L'Heureux, an El Nino and La Nina expert at NOAA.

Last year's Winter Outlook, once it was measured against the actual weather, got a score of 15 percent to 20 percent.

"While we did better than random chance, we didn't do as well as one would have hoped," she said. And that was because of a very strong negative Arctic Oscillation, a fast-changing atmospheric factor that contributed the cold air for Maryland's heavy snows. It's "always a wild card in our seasonal outlooks."

"This year's forecast is based on the expectation of a strong La Nina pattern, so as long as we don't see extreme AO values, then we should do reasonably well," L'Heureux said.

That is great news. There is nothing worse than a winter you can hardly dig yourself out of!