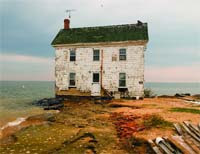 Photos from the organization show the delapidated house crumpled amid the bay waters, chimneys gone and sides collapsed. Water reached to the second floor of the house.

The foundation says strong winds over the weekend brought down the house on the lower Eastern Shore island north of Crisfield.

The last time I saw the house, it was perched on kind of a brick pier, and water was washing underneath," said Donald Baugh, the bay foundation's vice president for education. "We knew its time was coming." 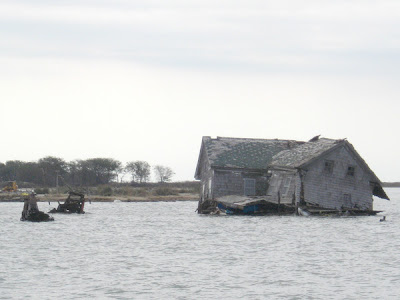 Reportedly settled in the late 17th century, the island was once five miles long. It was home to a fishing community of 250 to 360 people, with more than 60 homes, a church and other buildings. But erosion forced the residents to leave — with the last fleeing in 1922 — and for decades now only one abandoned home has remained, increasingly threatened by the bay.

A minister and former waterman, Stephen L. White, bought the island in the 1990s and attempted to preserve it from further erosion. But wind and waves from Tropical Storm Isabel in 2003 severely damaged the house and undercut the sand beneath it.

"It's really heartbreaking," said Tom White, 50, Stephen White's son. "He gave it his best shot."
www.baltimoresun.com
Posted by jmmb at 7:00 AM