Monster Display Too Scary And Is Shut Down 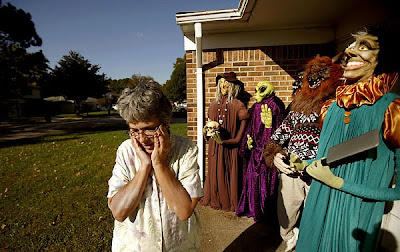 They're creepy, and maybe a bit kooky. But for some, Georgette Gaynor's monsters were too spooky.

After several complaints and a few screams from startled customers, Gaynor had to take down her 78 life -size monsters that populated the Greenbrier Dodge showroom at 1717 S. Military Hwy.

Gaynor said she was told that some people objected to the display.

"They were so real-looking," said Tom Robertson, Greenbrier Dodge general sales manager. "More than one person would walk in the door, and not paying attention, would look up and be startled by one of the monsters in front of them."

One was so scared she screamed and fell, Robertson said.

Gaynor, of Virginia Beach, spent six days hauling her monsters, fashioned out of spray foam, plastic netting and wire-mounted on PVC pipe, to the dealership, along with 700 pounds of weighted bases and iron poles to display the creatures. It took three days to set them up. The display was to be open to the public, and all were for sale for $150 to $250.

Two years ago, she displayed her monsters at The Gallery at Military Circle as part of an effort to collect non-perishable foods for the Foodbank of Southeastern Virginia.

In 2007 her creatures were exhibited to help raise money for the Kempsville Middle School drama club. About five years ago, she also created a haunted hall at Norfolk State University.

Her displays include a foursome of werewolves playing Texas Hold 'e m and Frankenstein's monster, along with a gallery of ghouls with names like Johnny Eyeballs, Crowbar Pete, Cruell Krull and Gruesome Guntar.

While scaring people was one thing, losing sales was another. One customer called the display demonic, Robertson said.

"Some people take the holiday of Halloween in a different way," Robertson said. "They'll plan out costumes and decorations three to four months in advance. But others consider it satanism."

The final straw was when one potential customer refused to walk through the showroom.

"He told us he loved his salesperson, but he couldn't buy a car in this environment," Robertson said.

The dealership offered to bring a car to the customer's home, but the potential customer refused, citing the company's business environment and beliefs.

"It was the hardest thing I've ever had to do," Robertson said. "But I run a business here. Two to three percent of the people who saw the display didn't get the right feeling about the message we were trying to have with Halloween, and once they go out and tell five others, then it can cause more problems."

Gaynor was paid a bonus for quickly dispatching the display and to make up for some loss in sales of her creatures.

"This broke my heart," Robertson said. "But for some, Halloween is devil-worshipping."