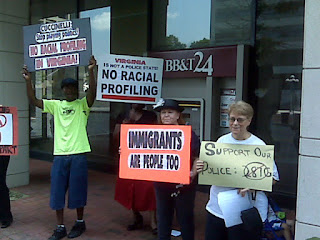 Protestors gathered outside of Attorney General Ken Cuccinelli's regional office in Norfolk Monday to voice their disapproval of the McDonnell Administration's recent actions on immigration.

The group protested for about a half an hour before attempting to enter the building to demand a meeting to drop off informational materials on the effects of anti-immigrant laws on the state. The group was unable to get inside the building so they're going to mail a letter voicing their opposition instead.

Last week, Governor McDonnell set forth to put into place the 287g program throughout the entire state of Virginia. The new law would give state troopers the authority to check people's immigration status when stopped for any reason.

Those organizing the protest, a statewide grassroots organization called Virginia Organizing , say McDonnell and Cuccinelli are "out of touch and reckless on the immigration issue."

Protestors are using this opportunity to encourage the McDonnell Administration to ask Congress to pass Comprehensive Immigration Reform instead of attempting to pass anti-immigrant legislation that will infringe on Virginian's rights.

One of the group's organizers told WAVY.com tax dollars are better spent on other issues than deputizing police officers.

Dave Gorak, with the Midwest Coalition to Reduce Immigration, disagrees with the protesters. He told WAVY.com, "Our immigration laws were created for the main purpose of protecting American workers. The Bureau of Labor Statistics says 21 million citizens and legal residents, many of them with no more than a high school education, are unable to find full-time jobs." Gorak continued, "Does Virginia Organizing think it fair that, according to the Pew Hispanic Center, the 7 million illegal aliens working in the construction, manufacturing, transportation and the service and hospitality industries be permitted to keep their jobs? If the Obama administration is serious when it says jobs for Americans are a "top priority," why hasn't he ordered their removal from our workforce?"