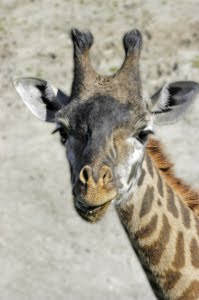 NORFOLK — Female giraffe Keana, who was known for hoof issues that caused a noticeable limp, died at the Virginia Zoo on Sunday morning.

Staff always kept a close eye on the giraffe, aware that her abnormal foot growth compromised her stability and gait. Her stall was equipped with padded mats, and care was taken to ensure she was safe and secure. However, early Sunday morning, she was found in her stall unable to get up from a resting position in which her rear legs were in a splay position. Zoo staff and the vet responded immediately to comfort and calm her. Despite their attempts to get her up, she was unable to right herself and return to a standing position.

"Even without hoof issues, a giraffe's center of gravity is so high – 5 to 6 feet off the ground – that these animals are prone to challenges associated with lowering and raising their large bodies to the ground to rest," notes Zoo executive director Greg Bockheim. "Sadly, such challenges are dangerous for these tall, high strung animals; they can cause critical internal injuries or disruptions in their physiological functions that could possibly be fatal."

At times Keana's limp and structural sensitivity was quite pronounced. In the spring of 2009, the Zoo issued a release about her foot issues and discussed the medical care being provided. Keana had a condition that caused the edges of her hooves to grow and roll inward. This abnormal hoof growth creates complications that affect a giraffe's weight bearing bones and muscles, changing its bone structure. Keepers trimmed and filed the hooves on a regular basis to keep them as close as possible to a normal shaped hoof. However, these types of structural changes will jeopardize the long term survivability of an animal. Keana was 8 years old. The average lifespan for a giraffe in captivity is 25 to 28 years.

In October 2010, Keana gave birth to a male calf that survived for only 5 days. The necropsy revealed that the calf had an abnormal heart. After the birth, Keana provided minimal maternal care to the baby, perhaps sensing that it would not be able to survive. This lack of care is common in the wild where the concept of survival of the fittest is protection for the herd. If a mother in the wild senses that a newborn is not healthy and will not thrive, conditions that are not detectable to humans, she may abandon it. These instincts are strong even in animals living in Zoos.

Also in October, the year-old calf Willow was safely transferred to Disney's Animal Kingdom in Florida. Willow's parents are the Zoo's other female giraffe, Imara, and male Billy.

Imara and Billy remain on exhibit at the giraffe yard.

Zoo staff, volunteers and faithful visitors appreciate the compassion and support of the Hampton Roads community during this very difficult time.
www.wtkr.com
Posted by jmmb at 7:45 AM