Oglesby To Begin Job At State's Attorney In Early January

by: Christine Cullen
(Nov. 19, 2010) The race to become the next state’s attorney for Worcester County came to an end last Friday, when incumbent Joel Todd conceded defeat to his challenger, Beau Oglesby, in the close contest.

Todd, who has been the state’s attorney since January 1995 and was a deputy prosecutor since 1985, bowed out of the race after the second round of absentee ballots were t 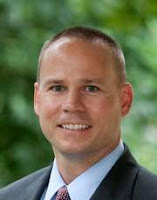 allied Nov. 12. Oglesby held a 90- vote lead over the incumbent, which proved to be insur- mountable with only a handful of ballots left to be counted next week.

“It has been my honor and pleasure to serve the citizens and visitors of Worcester County as a prosecutor since July 1, 1985. Justice, and only justice, has been my pursuit throughout that time. I have done the very best that I know how to do,” Todd wrote in a statement conceding victory to his opponent.

Todd ended the second absentee vote count with 10,4675 votes to Oglesby’s 10,555. The final tally of 35 absentee ballots that were held over, plus ballots sent in by members of the military, will take place Nov. 22, but there will not be enough ballots left for Todd to overtake Oglesby’s lead.

If all 50 military ballots that were sent out are returned, the total number of voted to be counted on Nov. 22 would be 85, which is fewer than what Todd would need to win. As of Monday, the county Board of Elections had received 14 military ballots. This was the second time Todd and Oglesby ran head-to-head for the office. Oglesby, a deputy state’s attorney in Caroline County, also challenged Todd in 2006. That election was even closer than the 2010 race: Todd retained the office by just 14 votes.

“We’re very happy with the outcome. We know our work is going to be cut out for us. We’re looking forward to proving to the voters who voted for me that their trust was well placed, and we look forward to earning the trust of those in the county that weren’t quite ready to vote for me,” Oglesby said Monday.

Oglesby will take the helm of the Worcester County State’s Attorney’s Office in early January. Until then, he will be on double-duty: continuing to prosecute cases in Caroline County and getting familiar with the major cases under way in Worcester County to ensure he is ready to take over prosecution.

“We’re already engaged in getting up to speed on all of the cases. I’ve already met with members of [the Worcester County Bureau of Investigation] regarding some of the homicide cases, and I will meet with them on all pending major cases,” he said.

“I intend to make the way as smooth for him as I can,” Todd said in the statement. “I pledge to the voters that during the remaining time in my term of office I will do everything I can to prepare him for the cases and issues awaiting him on the first Monday of January 2011.”

In his 25 years working for and running the state’s attorney’s office, Todd said he feels he has made a positive impact on crime in the county. When Oglesby takes over in January, Todd will return to life as a private citizen and he is looking forward to the privacy that will bring.

“I am grateful for the opportunity to have served. Now, I’m looking forward to not having to live my life under a microscope any more,” he said Monday.

I think Beau gets sworn in on January 4, 2011. He should just hire Todd as an assistant state's attorney to handle all these murders, afterall he is familiar with what is going on with them. Afterwards Todd can resign and go on and do what ever he wants to do.

Hiring Joel Todd as an assistant is probably the WORSE thing Oglesby could do. That certainly would give those that voted for Todd the impression that Oglesby isn't confident to handle the job on his own.

Bad move if he does. Oglesby certainly should have enough confidence in himself to know he will do a good job. He may sees things differently.
Best of luck to him. Sure he'll do a great job in Worcester county.