Wounded Bald Eagle Had To Be Euthanized 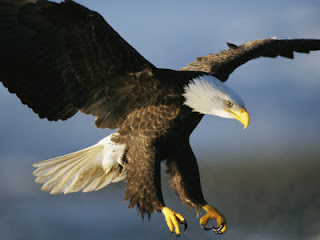 ONANCOCK -- An American bald eagle had to be euthanized after it was found severely wounded by a jogger who minutes earlier heard gunshots in the area.

The Virginia Department of Game and Inland Fisheries is investigating the incident, which happened in Mount Nebo, near Onancock.

"Shooting a bald eagle is the equivalent of burning an American flag," said Michael Fazio of Nebo Lane, who saw the bird fall out of the sky late last week.

The eagle's body was taken to the Wildlife Center of Virginia in Waynesboro, where a necropsy will be conducted to help determine what happened, Game Warden Sarah Druy said.

Bald eagles are protected under the federal Bald and Golden Eagle Protection Act, originally passed in 1940. The penalty for violating provisions of the act is a fine of up to $5,000 or up to one year in prison. Felony convictions carry a maximum fine of $250,000 or two years' imprisonment, according to the U.S. Fish and Wildlife Service website.

The birds also are protected under the Migratory Bird Treaty Act and the Lacy Act.

Cummings said eagles sometimes fight with each other during breeding season and the bird could have been injured during a fight.

Fazio was jogging along the road when a man wearing a hood and carrying a gun shot over Fazio's head. The two men had a verbal exchange in which the shooter said Fazio should not be out running on the road during hunting season and Fazio asked the man to wait five minutes before continuing in order to give Fazio time to get out of the area safely. The man said he was shooting at targets.

Fazio continued jogging and had gone about the length of three utility poles when saw the eagle spiraling out of the sky.

"I don't know if they are connected. ... We're not sure exactly what happened," he said.

Fazio ran back to his house, about a mile away, told his parents what had happened and grabbed a blanket, with the thought of trying to help the injured animal.

When he and his father returned to the spot, they found the bird about 20 feet away from the road.

They called the Accomack County Sheriff's Office, who referred them to Game and Inland Fisheries, where they got a recorded message. Fazio's father then called a local veterinarian, who gave him Cummings' phone number.

Cummings came to the scene and took the bird to Eastern Shore Animal Hospital, but its injuries were too severe and the bird was euthanized.

Anyone with information about the incident is asked to call the Department of Game and Inland Fisheries crime line at 800-237-5712.