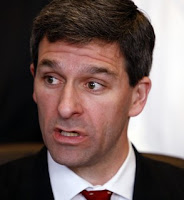 Citing a recent opinion from Attorney General Ken Cuccinelli, a state lawmaker from Northern Virginia hopes the public pressures its elected city councils and boards of supervisors to require their police and sheriffs to go after illegal immigrants.

But law enforcement agencies around the state — and some of the boards that oversee them — seem averse to adding another duty to already-busy workloads. And the ACLU is urging cities and counties to ignore what it calls Cuccinelli's "legally faulty" opinion, saying it will hurt public safety.

Del. Bob Marshall, R- Manassas, said getting people to understand that local police have the power to investigate the immigration status of people they detain was his goal in asking Cuccinelli to weigh in on the issue.
In an opinion released June 30, Cuccinelli said Virginia law enforcement officers — including local police officers and sheriff's deputies — have the power to ask people they arrest on crimes or pull over in traffic stops about their immigration status.

The Attorney General's opinion doesn't go as far as Arizona's controversial new anti-immigration law. While the Arizona law "directs" police officers to make "a reasonable attempt" to determine the immigration status, Cuccinelli merely said the cops have the power to check, but doesn't mandate they do so.

Cuccinelli made the determination even though illegal immigration is a federal — not state — responsibility. "So long as the officers have the requisite level of suspicion to believe that a violation of the law has occurred, the officers may detain and briefly question a person they suspect has committed a federal crime," he wrote.

Marshall said Cuccinelli's opinion should remove any doubt that local police officers and deputies have that authority.

Marshall's own county, Prince William, has adopted the strictest policy on illegal immigration in the state. The policy, adopted by the county's Board of Supervisors in 2008, requires police to check on the immigration status of everyone arrested — and report any such federal violations to the federal government.

"Why aren't more people doing what Prince William is doing?" Marshall asked. "The government should make this a priority. My thinking is that the public should ask their supervisors to tell their local chiefs of police to go ahead and do this."

Since 2008, sheriffs and directors of Virginia correctional facilities are required to check the immigration status of anyone booked, fingerprinted and taken into custody in their jails. They must report potential violations to the state police, which can then report them to the feds.

But there's no such rule for people given a traffic ticket; arrested on a crime and released on a summons to appear in court later; or arrested and granted bail before being jailed.

Marshall said the illegal immigration problem was highlighted again this week when an illegal immigrant accused of driving drunk slammed into a car carrying three nuns on their way to a retreat in Prince William County.

One of the nuns, Denise Mosier, died in the crash, while the two others are in serious condition. The driver, Carlos Martinelly-Montano, 23, is an illegal immigrant from Bolivia. Martinelly had twice been found guilty of driving drunk. But federal officials, citing a backlog, had not yet held his deportation hearing.

That led Corey A. Stewart, the chairman of Prince William County's Board of Supervisors, to say the federal government "has blood on its hands." The Benedictine nuns also weighed in, saying they don't want the death being exploited for political gain.

This week, using Cuccinelli's opinion as his basis, Marshall wrote to Gov. Robert McDonnell, asking him to issue an executive order requiring law enforcement officers in Virginia to do more to check into immigration status.

But even as Marshall cites Cuccinelli's opinion favorably, the ACLU slammed it in a letter to the police chiefs this week urging them not to follow it.

The ACLU's Virginia legal director, Rebecca Glenberg, said that contrary to Cuccinelli's opinion, state and local police in Virginia don't have the power to inquire about the immigration status of the people they stop. The ACLU also cited a federal judge's opinion last week that threw out portions of the Arizona law.

Such grilling, she said, would also "have an adverse effect on public safety" because illegal immigrants would feel less safe cooperating with police.

To the ACLU's letter, Marshall responded: "The ACLU's position essentially allows alien terrorists and gang members to be untouchable in this country. We cannot allow this to continue."

In contrast to Prince William County, Virginia State Police and most local police departments and sheriff's offices around the state take a hands-off approach to illegal immigration.

FEET ON THE STREET

"We're just trying to keep feet on the street," said Dana Schrad, the executive director of the Virginia Association of Chiefs of Police. "When you don't have the resources that you need, you're most certainly going to give your most immediate attention to what represents the real danger to the community."

"Investigating (an immigration violation) is up to the individual officer," added Hampton police spokeswoman Allison Quinones. "Is it something that's mandatory? No." But if information "presents itself" during a criminal investigation that someone is here illegally, she said, officers can and do often report that to ICE.

Numbers were not available on how often Newport News, Hampton or the State Police notify the federal government about illegal immigrants. They say they don't keep such numbers.

Recently elected Newport News Mayor McKinley Price said he has not heard from any fellow City Council members or the public that the Newport News police should be doing more.

"I feel comfortable with the way the police are handling the issue," Price said. "We're trying to get these teenagers to stop shooting each other, so there's already plenty to be concerned about."

Schrad said it doesn't always make sense for local cops to bombard federal immigration officials with notifications that they don't act upon. If a local police department reports someone and the feds don't deport him, that could come back to bite the police with reduced cooperation from that person later, Schrad said.

Until there's a national public policy shift, she said, trying to round up all the illegal immigrants up and kick them out is "like trying to bail out the Titanic with a Dixie cup."
www.dailypress.com
Posted by jmmb at 7:36 AM