Baltimore's Inner Harbor was once ringed by wetlands, but over time they gave way to development until only one was left.

Now there are two.

Volunteers in kayaks, a small boat and a canoe towed a "floating wetland island" from Fells Point — where it took form — to the waters alongside Baltimore's World Trade Center on Sunday. Tourists stopped to gawk and snap photographs as the environmentally friendly flotilla made its slow way along the harbor, the cargo more eye-catching in its greenery than anything else in the crowded waterway.
The Waterfront Partnership, a nonprofit that maintains and promotes the Inner Harbor area, installed the 200-square-foot wetlands as one small part of an ambitious goal to make the polluted harbor swimmable and fishable in 10 years.

"It's going to take all of us rolling in the same direction, but we believe it is possible," said Laurie Schwartz, executive director of the partnership.

It took a lot of people just to create the floating wetlands, which will soak up pollutants, produce the oxygen that's critical for healthy water and provide a place for crabs and other aquatic critters to live.

The Baltimore Harbor Waterkeeper, a water-quality watchdog group, paid the $50,000 cost from an air-pollution settlement fund. Biohabitats, a Baltimore-based ecological restoration firm, designed the wetlands — 11 separate rectangular structures made of plastic bottles plucked from the harbor, mesh and wood. Then, students with the Living Classrooms Foundation in Fells Point built the structures and planted them with marsh grass and flowers.

For weeks, the manmade wetlands floated beside the one other example left alongside the harbor — Living Classrooms' own marsh. Sunday morning, they headed off by boat and kayak to their permanent destination in tourist-heavy waters.

"Oh, here it comes — here it comes!" cried Schwartz, catching sight of the motorboat towing the first few pieces of wetlands toward the World Trade Center. She waved her arms and grinned, saying later that she felt just like an excited relative seeing a long-awaited baby for the first time. 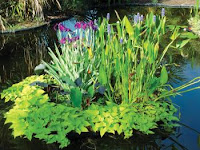 Mary and Jerry Nonnemacher, who live in Reading, Pa. and sailed into Baltimore for the weekend, watched this unusual parade and wondered what it was all about. Katie Bradbury, a 24-year-old from Fells Point, caught sight of the wetlands leaving Living Classrooms and followed them to find out where they were going. And Donna Davis, who works at the World Trade Center, dropped by to take pictures of kayakers pushing the structures into place alongside her building's pylons and roping them together.

Davis, an administrative assistant, knew the goal was better water quality. She hopes it works.

"If it helps, that's fantastic," she said.

Aquatic life is already responding. The underside of the wetlands is a hang-out spot for baby crabs.

But it would take a lot more than a marshy island the size of a bedroom to turn Inner Harbor water — which come from rivers rated "F" by an annual University of Maryland report card — into a safe place to take a dip or catch a fish. So much of the trash and pollutants that damage the water start off far upstream, from oil washed off roads to fertilizers running off suburban lawns.

That's why organizers hope the wetlands act as a conversation starter for passersby, making them think how their ordinary activities hurt or help the harbor.

And the newly installed floating island won't be by itself for long. The National Aquarium, just around the corner, is assembling its own on Wednesday. More might follow.

"It's a very small island in … a fairly big body of water," said Laura Bankey, the aquarium's manager of conservation. "We really only expect to see local changes. But that'll give us an idea, if we scale up this project, what kind of an effect could we have."
www.baltimoresun.com
Posted by jmmb at 8:41 AM