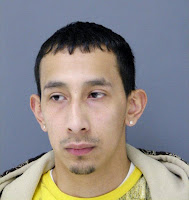 Carlos A. Martinelly Montano was being represented in deportation proceedings by Catholic Charities in the Diocese of Arlington when he allegedly struck and killed a Benedictine sister and wounded two other Richmond-based nuns in Prince William County while driving drunk this month.

Hogar Immigrant Services, an arm of Catholic Charities in Arlington County, was providing legal help to Martinelly Montano, 23, whom federal officials have described as an illegal immigrant, the organization said yesterday.

The representation by the Catholic-based immigrant service adds another development to the death of Sister Denise Mosier. Her Benedictine order has decried the politicization of Martinelly Montano's case, which has become part of the debate over illegal aliens and diverted what the order has described as the more relevant issue of drunken driving.

Police say Martinelly Montano's car crashed head-on into a vehicle carrying the sisters Aug. 1 as the nuns were traveling from Richmond to a retreat at their monastery near Bristow in Prince William.

Martinelly Montano is facing charges of driving under the influence for the third time in five years, a felony, and involuntary manslaughter. He is being held without bond.

Sister Charlotte Lange and Sister Connie Ruth Lupton remained in critical condition yesterday, according to the Benedictine Sisters of Virginia.

It is not clear why Martinelly Montano, a native of Bolivia, has been classified as illegal. The father of two young children, he was living with his parents and a sister.

In the statement issued last night, Art Bennett, president of Catholic Charities in the Diocese of Arlington, said Hogar "accepts only clients who are eligible to apply for lawful immigrant status or other benefits under federal immigration law."

What you might not know is that the Catholic Church receives federal grants to assist people like this. The assistance is for those that have fled their country due to persecution NOT severe hardships. I wonder how much money the taxpayer has spent buying this man his booze!