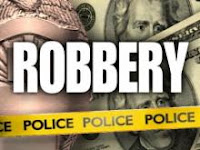 Police say the man who robbed a TD Bank branch on Briggs Chaney Road about 4:20 p.m. Tuesday was wearing a "long black burqa over his face." A burqa is garment worn by Muslim women that generally covers the face and body.

Authorities say the man showed a gun and demanded money. He took an undetermined amount of money and fled.

Police say the man spoke with what they described as "a Middle Eastern accent."

Police have not released a photo.