Take Precautions/Use Common Sense When Swimming In the Chesapeake Bay 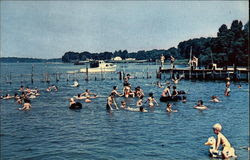 The naturally occurring bacteria, vibrio, can cause gastrointestinal illness as well as nasty skin infections — and sometimes can kill. So far this year, 24 Maryland cases of vibrio have been recorded, close to the average annual count of 30, but the season is far from over and officials say many cases likely go unreported.

"It's a summertime event in the sense that the organism lives in brackish water and really multiplies in the water when it gets hot," said Frances Phillips, Maryland's deputy secretary of public health services. "As expected, we're seeing an increasing number of cases."
Vibrio enters the body through cuts in a swimmer's skin or when undercooked shellfish is eaten. It's a problem every year in the bay and area rivers, but public health officials worry that this year could be worse.

Officials say swimmers and fishermen should avoid ingesting water from the bay and its tributaries, and should stay out of the water if they have an open wound. Parents should check their children for cuts and scrapes, and should wash them immediately with soap if the water gets near the wound.

Consumers, meanwhile, should make sure their shellfish is thoroughly cooked, and not eat raw shellfish such as oysters. It's not oyster season on the bay, but imported oysters could also be infected with vibrio.

Visitors to Gunpowder State Park in northern Baltimore County said Thursday that they had not heard about the warnings. But some took precautions anyway because they assumed there was some bacteria in the water.

"We always wash off when we get home," said Angela Neff of Perry Hall, who was swimming with her husband, Tom, her two children and three nieces and nephews. "We always think about what may be in the water, but we're not worried enough about it not to swim."

Sonia Austin of Northeast Baltimore said she checked the park website for warnings before bringing her 3-year-old grandson, Khalil Lawson, to swim. She said she didn't see any current advisories. After hearing about the alert, she still felt that the water was safe enough.

Health officials said they were not trying to discourage swimming by healthy people, who generally recover from an infection.

But vibrio can be deadly for people with compromised immune systems, including those with cancer and diabetes. They should avoid the water.

Anyone with symptoms should seek medical attention, health officials said. They usually surface in a day or two and include watery diarrhea with abdominal cramping, nausea, vomiting, fever and skin lesions.

Some local health offices plan to put warning signs at local beaches, including those in Calvert County, where a handful of cases have drawn media attention.

Dr. David Rogers, Calvert County Health Officer, said there have been four infections locally — three from contact with water from the bay and area rivers, and one from ingesting vibrio. He said he didn't consider that a lot of cases, but he issued an alert because the infections got some media attention after the Patuxent Waterkeeper, an environmental group, sought to alert the public to the dangers.

Rogers did not identify those infected, but they included a man who had fallen on a dock and cut himself before coming in contact with the water and a 10-year-old girl who got an ear infection.

"These are potentially very serious infections," he said. "If you get an area with redness, swelling and pus, it needs to be properly treated. In general, though, I don't consider this an alarming public health situation."

State health officials say that the official count of vibrio cases has not risen much in recent years — there were 29 in 2004 and 33 in 2009. But Phillips acknowledges that many people probably don't see a doctor or the doctor doesn't test for vibrio or report the findings to state health officials, as required by law.

Nationally, the U.S. Centers for Disease Control and Prevention reports that there are about 4,500 reported cases annually, but the agency also says that cases are underreported.

A 2009 Chesapeake Bay Foundation report on water quality found vibrio and other contaminants in the bay waters becoming an increasing problem. Normally associated with warmer waters such as the Gulf of Mexico, vibrio has become more common in the bay as the world's waters have warmed. In the last year or so, it has even been found in Alaska.

Contributing to that report was Rita Colwell, a professor at the Johns Hopkins Bloomberg School of Public Health and University of Maryland, College Park, who has studied vibrio for decades.

In an interview, she said the bacteria thrives because the salty waters are warming and because runoff polluted with nutrients is fueling growth of plankton, which feeds critters that host vibrio. In dense concentrations, the vibrio make people sick.

If the waters continue to warm and pollution increases, the bacteria will remain out of balance and cases will tick up, she said.

"I don't anticipate a large outbreak," she said. "But people need to take precautions, use common sense."
www.thebaltimoresun.com
Posted by jmmb at 7:35 AM